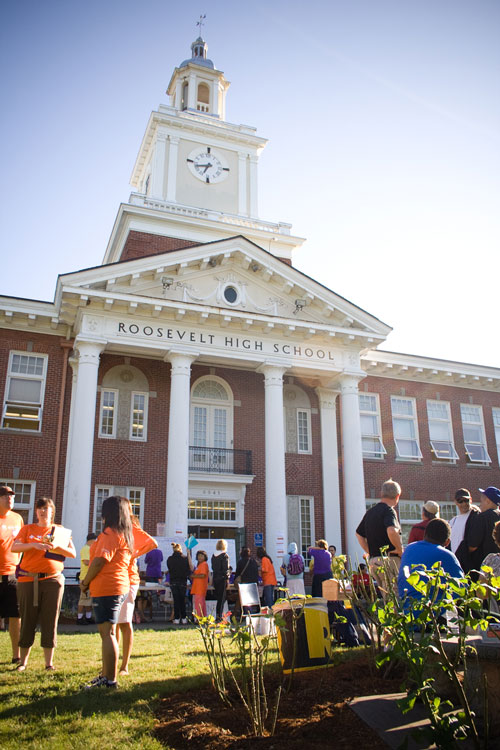 Around 600 guests and volunteers came to Roosevelt High School for the Compassion North Portland Event on August 4.

“We joined this effort in order to get to know and love our neighbors in North Portland, but also to get to know other Christians in the area who have a mission to the neighborhood," says principal branch coordinator Charlie Fraga. Charlie described one of his personal highlights during the day. "I met a young man whose glasses were smashed in a mugging last April. He said he had very bad eyes but hadn’t been able to get glasses since the mugging. Later in the day I saw him with glasses on. ‘I’m so happy,’ he said. ‘I can’t tell you what you guys have done for me today!' He was practically dancing.”

Luke Glover (Vancouver/Portland), who led the parking and security team, said he found a line of people already waiting when he arrived at 5:45 a.m.  The temperature soared to 100 degrees during the day, but many waited patiently to set up appointments with dental, general medical or optical specialists and filled out paperwork during their waits to speed things along.

Before and after their individual appointments, guests could browse through 41 booths staffed by workers from social service agencies such as the American Diabetes Association, WorkForce Oregon and Catholic Charities. Linda Jo Devlaeminck (Vancouver/Portland), helped organize the booths. “I learned as I went along,” she says. “I had no clue what the job was going to look like when I started.” (She adds that she’d happily do it again.) Her team provided maps indicating where specific booths were located, and color-coded the tablecloths according to the type of service offered.  When the opportunity arose Linda Jo asked guests which booths were most helpful to them. One man, there with his family, said through an interpreter, “Every booth was helpful!” 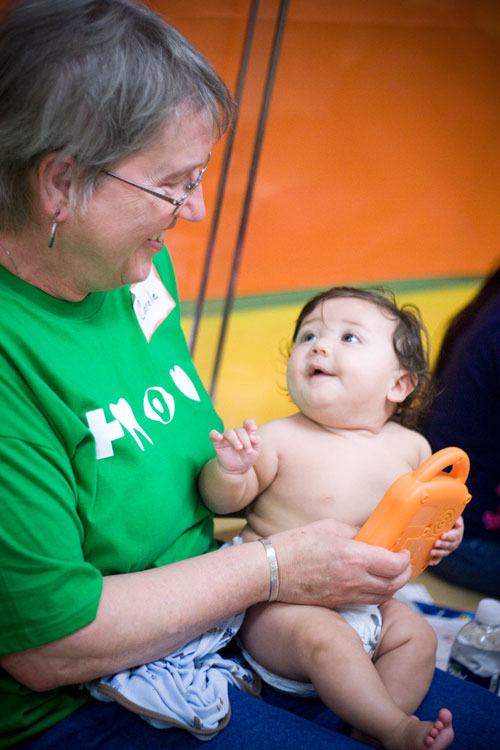 Six vans organized by Fred Dang (Vancouver/Portland) transported guests to off-site dental appointments. (Other appointments were held at the school.) Mike Freeman (Vancouver/Portland) produced promotional materials for use before and after the event, and joined the prayer team, along with several members of his men’s group. They interceded for the event regularly beforehand, and sat in various public spots that day, praying with anyone who asked and praying for prayer requests that guests had submitted in writing.

Ann Martinez (Vancouver/Portland) recruited and organized 20 people to serve as translators, primarily for Hispanic guests. “I was struck by the humility of all the volunteers I met. They were willing to work hard and dove right in,” she said.

All told, more than 50 branch members helped plan, organize or execute the event, and branch volunteers led seven of the 15 planning committees. David Brewer, one of Compassion North Portland’s primary organizers, said he appreciated all the help from the People of Praise. “I have been deeply impressed with the commitment level of the folks in the People of Praise. That commitment showed in the financial investment, in leadership and volunteers. And the spirit of service and collaboration has been tremendous to experience.”

After their appointments, guests filled out forms and went through exit interviews. Organizers are collating the information and will be distributing names of willing guests to some of the churches and other groups for follow-up. Charlie asked for 15 names for the branch. “We’ll see whom the Lord brings to us,” he says. 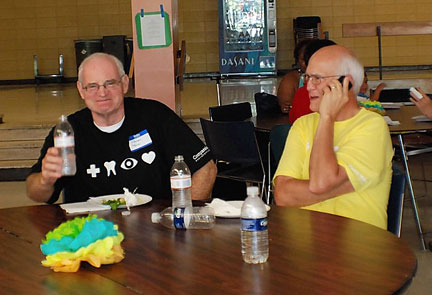 He adds that the event was a big success from an ecumenical point of view. “Christians from different denominations have gotten to know one another, and the key leaders all seem to share a natural desire to collaborate, to respect and support one another in spite of their wide range of Christian backgrounds.” Charlie says the leaders will be meeting soon to discuss possible next steps, if any. “I'm looking forward to being part of that conversation.”