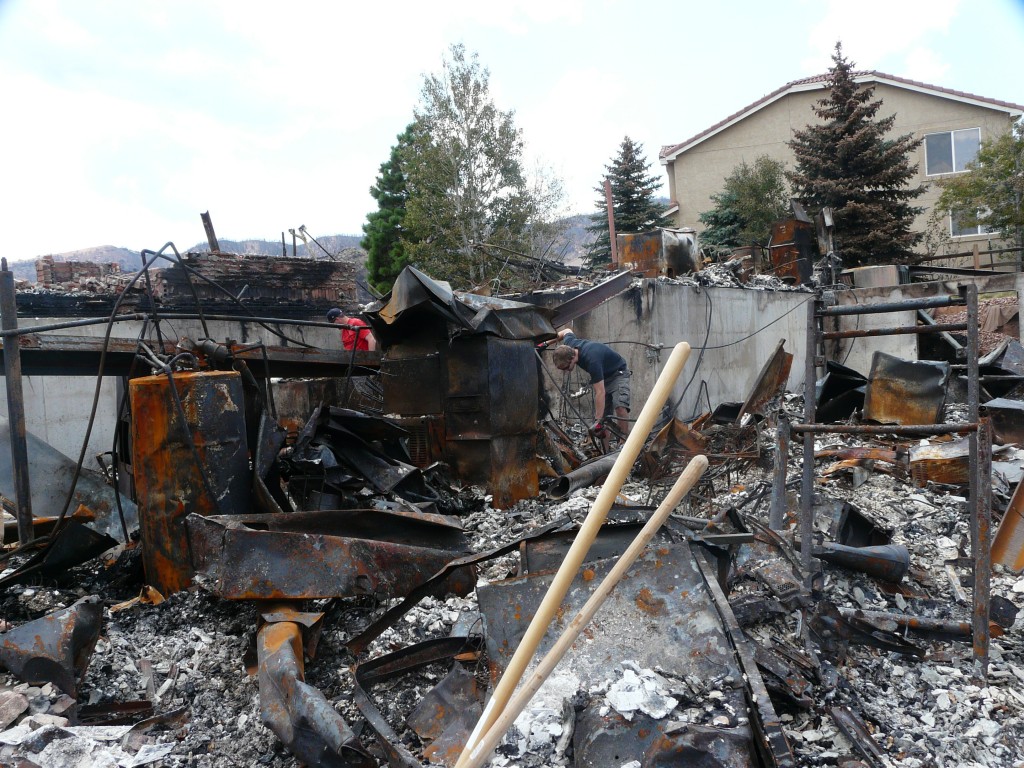 Branch members Phil and Carol Ehemann and Keith and Cathy Houin helped dig through the rubble at a home owned by members of their church. "We found very little other than burned fragments of books and other items," Phil says. "Our friend had hundreds of dollars in old silver coins. They melted into globs of silver, like very large pieces of melted solder."

The Waldo Canyon fire still smolders outside Colorado Springs, but community brothers and sisters and many other residents who left their homes have returned safely. On Tuesday night, firefighters, capitalizing on favorable weather conditions, finally contained the fire, which had burned 346 houses on the city’s western edge. No homes owned by community members suffered any significant damage.

“This fire will affect the city for a quite a long time,” says branch leader Pat Hrbacek. “It’s incredible that it didn't do more damage. The fire demonstrates the power of nature, but also the power of the Lord.”

“God’s hand was on us,” adds Jennifer Ortiz, whose Mountain Shadows neighborhood was hit hard. On the night the fire moved through, she was out of town with her family. “I just lay in bed and praised God. I didn’t know if our house was going to burn, but I knew God was going to be with me and I’d get through it.”

Phil and Carol Ehemann had left their house in a hurry with their two visiting grandchildren. “The grandkids were pretty scared,” Phil says. “It was almost like night, the smoke was so thick. The sun was a red disk, like a science fiction movie. We were out of our house for three days. Twenty-four families from our church lost houses.”

Jennifer says that area residents have been extremely generous since the devastation. “There have been benefit concerts, meals every day for people who lost homes, churches asking people to stop bringing donations. Everywhere you drive there are signs: ‘Thank you, law enforcement'; ‘Thank you, first responders.’”

Branch members have already been helping friends and neighbors, and Pat Hrbacek says they are thinking and praying about how to continue to help over the long haul as people get back on their feet after the fire. “It’s going to take time,” he says.