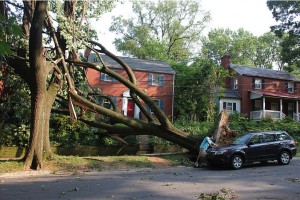 A tree that fell down during the storm took down powerlines and two utility poles with it. (Photo: woodleywonderworks.)

Violent thunderstorms rocked the Washington, DC, area on June 29 bringing lengthy power outages to more than 50 community households. They were among 1.4 million area residents who lost electricity. Northern Virginia branch members banded together through outages that lasted from one to five days. Those with electricity offered their freezers, places at their kitchen tables and spare bedrooms to those in need.

The storm came amid a heat wave that broke records and included four straight days of temperatures over 100 degrees. Ten DC-area residents died from weather-related factors following the storm.

“By the Lord’s grace we were spared serious damage or injury,” says area coordinator Terry Cassell. “In fact, for many of us the week had a silver lining—it provided us with a great experience of community living.”

The storm hit the area about 10:30 p.m. on Friday night, just a few hours after two buses of children and adults had returned from Buffalo Camp. Travel immediately became dangerous due to blinding rain, nonfunctioning traffic signals, falling branches and downed power lines.

Jon Cassady was working late the night of the storm and noticed the lightning, so he began to drive home. He says he was forced to crawl along at 10 mph, which meant he could spot a huge tree branch just before it fell on the road. “I might’ve been seriously hurt," he says. 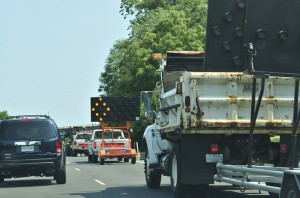 Clean up crews on the move. (photo: Arlington County.)

On Saturday Bill and Barbette Brophy faced the task of every household without power--saving what food they could from the slowly warming refrigerator and freezer. They considered putting some of it in Bruce and Anita Brand’s large freezer, but they suspected it might be needed by other community neighbors (it was). Instead, they took their food to a relative's home. Later in the day, the Brands had the Brophys over for a Lord’s Day meal.

Eileen Pizer, who didn't lose power, says she was happy to move a group Lord’s Day meal to her apartment on short notice after Julie Conroy lost power. She also invited several women to spend the night in her air-conditioned home. (Two of them did.) “I tried to invite more, but I couldn’t get through to them because the phone service was so sketchy,” she says. Phone systems failed and cell phones were unreliable for several days.

Laurie Magill says she was moved by the way the branch coordinators immediately began assessing who might need help. “It wasn't an easy job,” she says, “with the phones not working well.”

There were other logistical challenges. When Bill Brophy went out to buy coffee, he found most of the McDonald's and Starbucks stores were closed due to lack of power. The ones that were open had long lines, and purchases had to be made in cash, because credit- and debit-card machines had stopped working. Gas stations and grocery stores were either closed or had limited supplies, long lines and a cash requirement.

Branch members said it was difficult to make plans because no one knew when the power would return. Kathy Temeles’s power was off for three days, came back on, then went off twice the next day. After the power came on at her workplace, she went in to charge her cell phone. “Thank God I had just gotten some cash before the storm hit,” she said, “but I had to wait an hour in line at each of the two restaurants I ate at that week. I'm grateful the Ridenours had me over to dinner a couple times.”

Rick Ridenour notes that offering hospitality had its benefits. During the most difficult days, Frank and Carolyn Bassett came to stay with them. “After Carolyn returned home, she had a Thanksgiving-in-July meal for us to cook a turkey that was taking up a lot of freezer space,” he says. "It was great!"

While they were out of power, Tom and Therese McNichol received so many dinner invitations they had to turn some down. Therese called to mind a recent prophecy she had given at a branch meeting, in which the Lord called members to put more of their lives in common. “It looks to me like he gave us a way to do that!”