by Elizabeth Grams and Sean Connolly 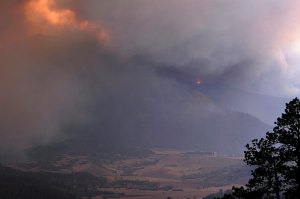 As the massive Waldo Canyon wildfire raged on the edges of Colorado Springs, branch members gathered at Pat and Kara Hrbacek’s home Wednesday night to pray for their city and region. Everyone in the branch is safe and unharmed, but 10 brothers and sisters left their homes this week to avoid the encroaching blaze. Evacuees include Judy Allgeyer, Phil and Carol Ehemann, Keith and Cathy Houin, Bren and Karen Triplett, Sean and Kellee White and Jon Grams. (Jon has already returned home.)

By Wednesday night, branch member Jennifer Ortiz had heard no official word on whether her home had survived after the fire spread to the Mountain Shadows neighborhood, where it burned at least 300 houses. John and Katherine Brophy, who live outside the burned area, own a rental house next door to the Ortizes and were also awaiting word on its status on Wednesday afternoon. The Ortizes learned of the fire early in the week while on vacation in the Washington, D.C., area. Before a mandatory evacuation order was enforced in Mountain Shadows, branch members pulled some of the Ortizes' valuables from their house and covered it with tarps to protect it from flying embers. "We're just so grateful to everybody for their help and prayers," Jennifer says.

Events took a turn for the worse on Tuesday afternoon, when 65 mph winds caused the fire to leap over a ridge and move toward occupied areas. Kelly McMullen took in evacuee Judy Allgeyer on Tuesday evening. “I was still up around 12:30 when a strong waft of smoke came through the open windows," Kelly says. "I went outside and walked near Cragmor Christian Reformed Church, where we have our branch meetings, looking to the west to see if the flames were getting worse. I found four other neighbors doing the same thing. You could hear sirens in the distance, a constant background noise.” Kelly spent Wednesday glued to the news reports on TV. “Even the calm among us are watchful, as we pray for safety and deliverance from the danger."

Sean and Kellee White put on breathing masks and Sean handed out spare masks to neighbors as they packed their truck and van full of possessions amid thick smoke, prior to leaving their home on Tuesday. The Whites and their five children are staying with Rick and Betty Busekrus. “Not knowing when or if we'll be able to go home is strange,” Kellee says. “But we’re just trusting in the Lord.”

The Ehemanns had to move out the same afternoon, along with several relatives who are visiting Colorado Springs for a family reunion planned for this coming weekend. Keith and Cathy Houin stopped by Judy Allgeyer's house before they left the neighborhood to make sure she was taken care of. The Triplett family voluntarily left their home on Sunday. All three families are staying with friends in the city.

Jon Grams left his Manitou Springs home south west of the city early in the week, but as the fire moved north, he was able to return home, in time to assist the Whites with their evacuation. “It will take dozens of years for vegetation to come back in burned areas,” he says, pointing to one of the fire's long-term effects on the city.

Kelly McMullen noted a number of ways Colorado Springs residents are pulling together, offering rooms to strangers fleeing the fire and praying publicly for the safety of all. “The whole city is acting like community,” she said. “I know the urge to pray for rain is strong, but rain usually comes with wind here, and so what we really need is stillness. If the wind is still, the fire will spread more slowly. Firefighting planes can’t fly when the winds are high.”

Branch leader Pat Hrbacek could see the smoke and fire moving down toward occupied areas from his office on Tuesday afternoon. “Branch members are looking out for one another,” he says. “People are good at getting on the phone and checking in. The hardest part was confirming that everyone was okay. Kevin Ranaghan (South Bend) has been sending out email updates, and knowing that people are praying for us is very comforting. It means a lot to everybody here.

“Pray that the people of Colorado Springs, especially the evacuees, will be able to get through this time with some peace, knowing that the Lord will take care of their homes and take care of them. Pray against fear and anxiety and pray for the Lord’s guidance in terms of what we can do in our own neighborhoods to help rebuild wherever rebuilding is needed.”