In Allendale, A Busy Season Begins 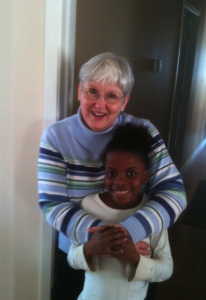 Patti Deakin with one of her neighbors.

In Allendale, members of the Christians in Mission team are taking on new jobs, new responsibilities and preparing for new members. "Every member of the team is doing more than ever. It's a busy time," says David Zimmel, the mission coordinator responsible for Allendale.

Nathan Barrett, who leads the Christians in Mission team, recently accepted a full-time job working with MBI, a Shreveport-based manufacturer of blast-resistant buildings. Nathan and Genevieve are expecting their third child in May. Genevieve, a part-time physical therapist, recently volunteered to cook dinner each week for the single women's household so that they are free to run an after-school group for neighborhood children.

Ben Reinhardt, a 2011 graduate of the University of Minnesota, has taken over responsibility for day-to-day administration of the Allendale work. He coordinates the work of visiting Action teams. He also makes himself available to respond to calls and visits from neighbors: a young man who needs a ride to a job interview or a neighbor who needs a ride to the hospital.

Kathleen Mehaffey recently became the leader of the single women's household. The change freed up some time for former leader Joan Pingel, a special education teacher, so she can study more effective ways to work with the children of the neighborhood. Joan and Kathleen also make time for regular visits to a young single mother, Susanna Howard, who lives a few blocks away. "We are reading through the Gospels together," Kathleen says. "She invited us to her baby shower and recently told us that we should start inviting more people to join us when we get together."

Laura Brummer, a phone operator for a group medical practice, runs one of three weekly after-school groups for neighborhood girls. She also enjoys driving neighborhood children to church each week. When the number of regulars grew to four, she asked for help from Colleen Murray and Ben. Three of the children have asked to be baptized, so Laura, Colleen and Ben are teaching them about the 10 Commandments and other Christian basics so that they can be baptized in their respective church congregations.

Gerry Deakin, a sales rep for LaSalle Company in South Bend, also acts as neighborhood bike repairman and landscaper for the CIM team. Lately, he has also helped with administrative tasks related to the community's purchase of some nearby properties. His wife, Patti, meanwhile, talks with neighborhood women who drop by, and runs a weekly exercise group for some of the women.

Ruthanne Seitz (Shreveport) continues leading a weekly Bible study for a group of older neighborhood women. Ron Seitz, her husband, a retired Lutheran pastor, walks over to the women's houses and escorts them to the Bible study. Claudia Stephens, one of the regulars, recently ran into some family problems on her birthday. At one point in the day she thought, O Lord, if only I had some help with this situation. Just then there was a knock at the door. It was Ruthanne and Patti bringing a birthday dessert. The three of them were able to pray about the situation together, a great comfort to Claudia.

Thomas Duddy has finished his first year as a nurse at Shreveport’s VA hospital. He keeps up a friendship with Ed Allison, a retired neighbor who has come to prayer meetings and has helped with Action projects in the summer. 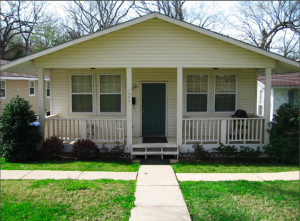 What’s next for the CIM team?  A volunteer crew comprised of about 30 women from campus and mission divisions will arrive for a work trip in early May. In late May, Edna Malone will move in, ahead of her husband, Pat, who is coming in mid-June after wrapping up his 25-year teaching career at Trinity School at Greenlawn. The Malones are excited to be joining the CIM team in Allendale. John Bowar (Servant Branch) will also be joining the team this summer, following his graduation from the University of Minnesota.

Action teams will begin arriving in June and will get right to work repairing neighbors' homes and organizing the summer camp. After record attendance at last year's camp (57 campers at its peak), this year's camp will be divided into seven different groups along age and gender lines. At the end of the summer, long-time team member Josh Caneff, a remote employee of the Healy Group in South Bend, and Mary Claire Busk (Indianapolis) will be getting married. (The wedding will take place in South Bend.) Mary Claire recently moved from Indianapolis to Allendale and is living in household with the Barretts.

"The Lord is doing so much with us that it is sometimes hard to keep track of it all," David says. "We are especially grateful that he is giving us new CIM team members so that we can continue to grow and expand his work in Allendale."