In New Orleans, A Spelling Bee Champ Preps for Nationals 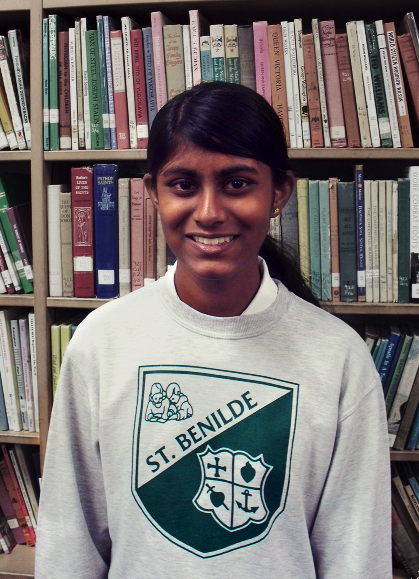 Jessica Davis, the 13-year-old daughter of Basil and Shyla Davis (New Orleans), out spelled nearly 200 other students to win the New Orleans regional spelling bee in March. Her victory secured her a spot in the highly competitive Scripps National Spelling Bee, to be held in Washington, DC, in late May. Jessica will have to pass a written spelling test and two oral exams to qualify for the final event, the famous spelling bee televised nationally on ESPN.

“I really didn't think I could win,” Jessica said, “especially when I heard that last year's winner was allowed to try again.”

In addition to overcoming the defending champ, Jessica beat out competitors from 40 schools in a large region comprised of seven parishes and including the city of New Orleans. One competitor was her own 11-year-old brother, Peter, a sixth-grader, who also made it to the top five before getting knocked out in round 12 after misspelling the word “homburg” (a stiff, German-style felt hat).

Those final four spellers hung on doggedly for 22 more rounds, so long that the judges ran out of words on the list of 500 they had given the participants as a study guide. At some point Jessica realized she was in uncharted waters, needing to spell words she had not practiced.

In round 34, all four correctly navigated through words like “hoomalimali” (a Hawaiian word for something whose purpose is to attract positive attention) “sarsaparilla,” “perestroika,” “apparatchik” and “beetewk” (a Russian breed of work horses).  Finally, the other three stumbled on “cinephile,” “phosphorus” and  “symmetrical,” respectively. To secure the win, Jessica spelled two words in a row correctly: “morose” and then “forage.”

A seventh-grader at St. Benilde School in Metairie, Jessica follows in the footsteps of her older sister Melinda, who won the same contest two years ago and went to DC. She and Shyla had brought Jessica along for the week of activities, including tours of the national monuments. “I think that experience made a big impression on her,” says Shyla.

“This past fall my mother told me to give spelling bees a try,” Jessica says. “I did, and discovered how fun it is.”

Jessica attributes some of her success to her love of reading. “It’s easier to remember a word if you’ve read it.” She reads all sorts of books; The Lord of the Rings is her favorite series. Another factor in the win: “I studied the guide list, and my brother and I quizzed each other.”

Basil will be the only family member available to accompany Jessica to Washington for the national bee. “We didn’t put much thought into the possibility she might win, so we went ahead and purchased tickets to go back home to India for a family gathering,” Basil said. “Shyla will go to India as planned, with Melinda and Peter. Jessica and I will join them later.”