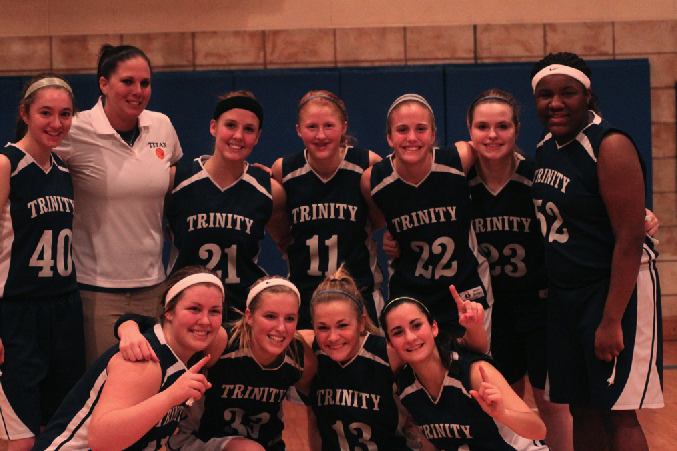 The girls’ varsity basketball team from Trinity School at Greenlawn edged out Lighthouse Christian Academy of Bloomington, Indiana, to win the state tournament of the Indiana Association of Christian Schools (IACS) on March 3.

“The outcome was in question the entire game, but our girls prevailed and won by one point: 37-36,” said first-year coach Heather Hahn. “I’m tremendously proud of how theyplayed.”

“We felt a lot of momentum remaining from last year, when we came in second in the same tournament with basically the same players,” says junior co-captain Christen Havard, who plays post.

“We had heard that Lighthouse Christian was pretty good,” adds junior guard and co-captain Marian Delee, “but we were still confident.” 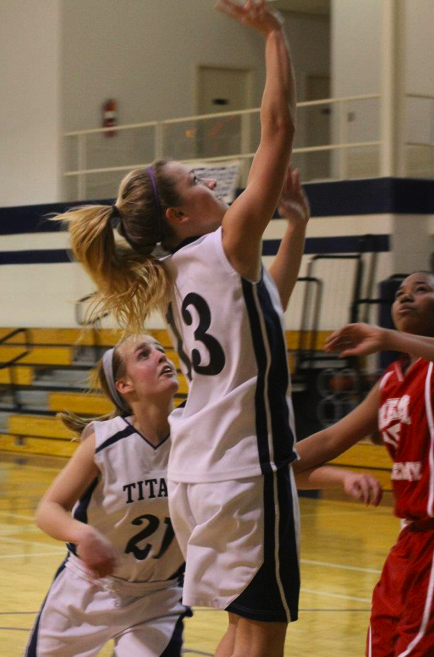 Katie Was and Marilyn Preuss.

Trinity started out slow, with Lighthouse making the first few baskets. “Eventually Molly Hoover made a three-point shot that rallied us,” says Marilyn Preuss, a sophomore playing post. At the end of the first quarter, the score was 11-14 Lighthouse.

The lead seesawed from team to team in the second quarter. “I was frustrated,” says Christen. “I wasn’t getting rebounds and shots. But I was more concerned with how the team was doing. We started accumulating fouls.” At the half, Trinity was still down 18-22.

Christen remembers half-time: “We looked at one another and said to ourselves, ‘We’re not losing! We’re going to win. We’ve been looking forward to this since last year.”

“Second half we had a more solid defense and started thinking about our shots,” says Marian. “We scored less, but we got our heads together. The fans were cheering more, which gave us energy.”

At the end of the third quarter, Trinity was behind by the largest margin of the night, 26-32, but the tide quickly turned. Molly Hoover made another three-point basket, and Trinity managed not only to catch up but to fashion a six-point lead from which Lighthouse never fully recovered. 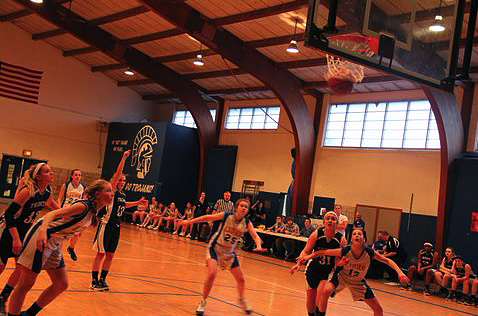 Molly Hoover, Katie Was and Christen Havard in the championship game.

Except they almost did. During the last few minutes, “Lighthouse slowly caught up to us with free throws,” says Marian. “We knew they wanted to foul us to get the ball back, and win through free throws. But we passed back and forth so well they weren’t fast enough to foul us. It was like a giant game of Keepaway, until the clock wound down.”

“Coach had taught us how to close up games,” says junior guard Katie Was.

The girls ended the season with a 19-5 record.

“The best thing about coaching at Trinity is that there’s no attitude problem,” says Coach Hahn. “The girls care about one another and help one another. Plus, there are no seniors on the team this year so I expect an experienced crew and bright future next season!”