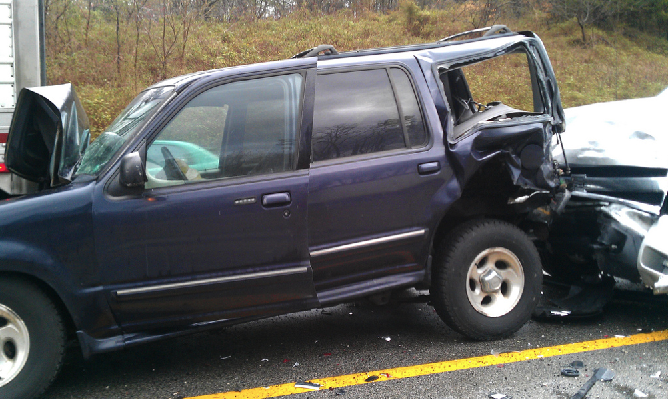 On a stormy afternoon in early March, a pickup truck traveling at highway speeds slammed into the back of a Ford Explorer carrying Justin and Cathy Walters (CIM Indianapolis). The pickup shoved the Explorer forward, lodging it beneath the back of a semi. The Explorer’s windshield shattered; its hood crumpled like paper. But Justin and Cathy, their car smashed between two vehicles, escaped unharmed except for minor whiplash.

Justin and Cathy were driving to North Carolina to visit Justin’s two sisters and their families on Friday, March 2. They passed through storms in Kentucky that reduced visibility and caused slick spots on the road. An accident ahead of them halted traffic on I-75, creating a long line of stopped vehicles. A semi sat at the end of the line and Justin stopped behind it.

A couple seconds later, they heard a loud bang and felt a massive jolt as the pick up truck slammed into their Explorer. A semi’s huge back bumper loomed just a few feet in front of their faces. “The suddenness was disorienting,” says Justin. “The rear-end and front-end crashes felt like one big collision.”
The Explorer came to a halt. Its airbags deployed.

People got out of their cars and offered help, encouragement and prayer. Several witnesses described the events to the police. The driver of the pickup apologized for failing to stop in time, and Justin and Cathy offered their forgiveness.

An ambulance brought Justin and Cathy to a hospital for X-Rays and CAT scans, but the tests showed no serious injuries. After several hours–spent mostly contacting family and friends–they were released.

The Walterses’ insurance company declared the Explorer totaled, offering them a generous settlement that has helped them buy a new car.

“God’s angels must have been busy looking after us,” says Cathy.

“We are so aware of how much worse things could have been,” adds Justin. “From what we could tell, the other two drivers also experienced little more than whiplash.”