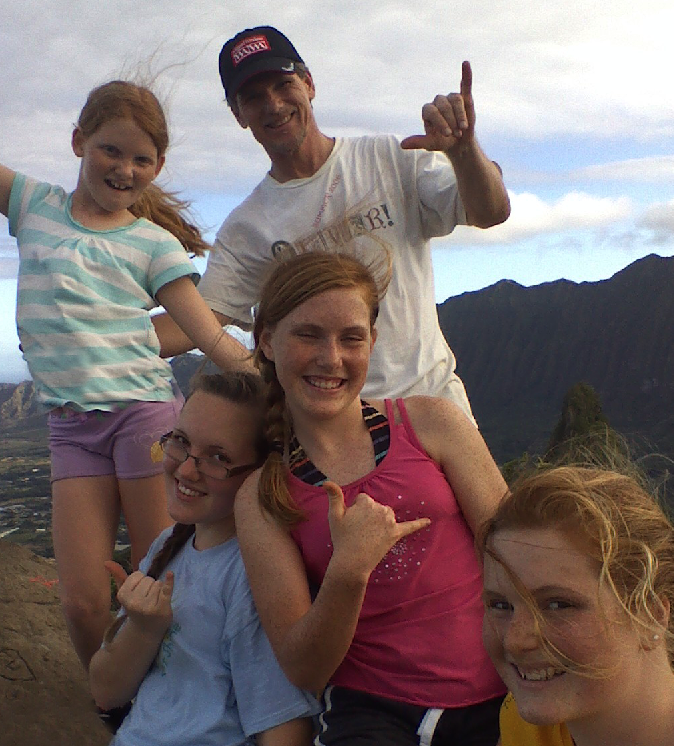 Don Busekrus and his daughters.
Don Busekrus (Oahu) was healed of painful leg cramps after two community members prayed with him in January.
His struggles with shooting pains and with intense nighttime cramps in his right leg began in 2007. He was diagnosed with sciatica and had surgery for a pinched nerve, which cleared up the trouble. Last November, Don carried the family Christmas tree from his pickup truck to the house, “a big mistake,” he says. “The next morning, I recognized the symptoms of sciatica in my left leg.”
Don soon developed a limp and he couldn’t lift anything during a family move in December. Most of the pain subsided after a few weeks (he was prayed with many times by branch members during this time), but cramping in his calf muscles continued to wake him three or four times each night.
At the community meeting on January 22, Thomas Duddy (CIM Shreveport), who was in Oahu for a baptism, described how he had prayed with a patient with restless leg syndrome at the VA hospital where he works as a nurse. The patient had complained that his shaking leg was keeping him awake. Thomas prayedwith him and he had a good night's rest.
In the parking lot after the meeting, Thomas’ father, Tom Duddy (Oahu), suggested that Thomas and Michael Coney (CIM Indianapolis), also visiting, pray with Don. Thomas and Michael bent down, laid their hands on Don’s left leg, and prayed briefly.
Don didn’t feel any immediate change after they prayed. Later that evening, as he lay in bed, Don felt the usual pain start in his leg. “Rather than passively accept the pain, I rebuked Satan in Jesus’ name and adopted the attitude that the guys had healed me with their prayer.”  He had no more cramps that night, and as of four weeks later, the cramping has not returned.
"Now I can get a good night's sleep, which gives me much more energy for work," he says. Don's wife, Alana, agrees. "This healing has had a big impact on Don."