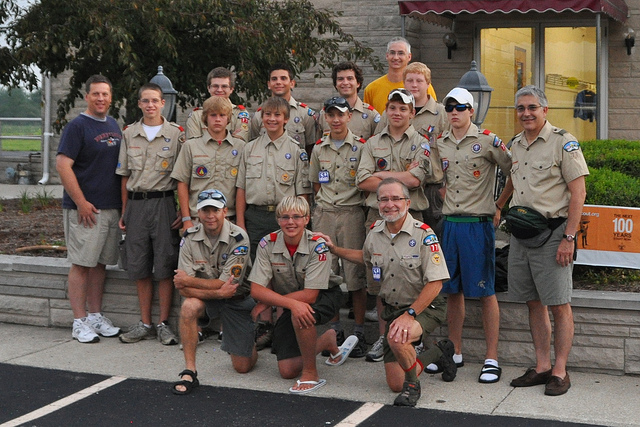 Muncie's Troop 77 on a trip to the Rocky Mountains in 2010. Pete Walters is in the bottom row on the right. (Photo courtesy of Greg Walters.)

Troop 77, a Boy Scout troop sponsored by the Muncie branch, celebrates its 25th anniversary this year. With 42 boys, the troop is larger than it has ever been. Members just learned that their scoutmaster, Pete Walters (Muncie), will receive the highest honor a volunteer can earn from the National Council of the Boy Scouts of America--the Silver Beaver. Awarded for “outstanding service to young people over an extended period of time both in Scouting and within the community at large,” the Silver Beaver will be presented at a luncheon on January 21 at Warren Central High School in Indianapolis. Pete was one of 16 to receive the award from a pool of 10,000 eligible volunteers, according to the Crossroads of America council of the Boy Scouts.

Pete and fellow branch leaders Alan Habansky and Tom Schmitt founded the troop in 1986 as a way for the Muncie branch of the People of Praise to serve its sons. “An Eagle Scout for the past 44 years, Pete knows what Boy Scouting can do for our young boys to help them become the young men of God that we want them to become,” says principal branch coordinator Jim Schenkel.

Six years ago, the troop nearly dissolved after membership dwindled to five boys. Pete says the boys deserve much of the credit for its resurgence. “I came up to the boys,” Pete remembers, “and said, ‘Look, guys, I’m busy with a lot of things at home, at work and in the People of Praise. Scouts are boy-led. What are you going to do about growing?’”

One of the scouts, Taylor Davis, suggested that they pray for more members. The boys committed t

hemselves to regular individual and joint prayer, and they took advantage of every opportunity the Lord provided. Scout Peter Coleman (Mission Division, Evansville), remembers discussing the matter that summer with scouts from another troop who were helping him on his Eagle project. It turned out that troop was also down to six members and losing its scoutmaster. After some discussion, those boys and their two assistant leaders joined Troop 77, doubling its size. Since then, more boys keep coming each year. “I might not be receiving this award now if those guys hadn’t prayed and taken the initiative,” says Pete.

Troop 77 is known for its big backpacking trips to places like Colorado and the Upper Peninsula, says Terry Bomkamp, a former Muncie scout leader who has moved to the Rockford branch. He joins Troop 77 each year for the event, handling logistics for the group.

“When I think of Pete, I think of his genuine desire to have a strong personal relationship with each of the scouts,” says troop alumnus Taylor Davis. “I have experienced some of the most difficult times of my life on my high adventure trips with Pete. He is a role model for me, and exemplifies a strong character every day.”

Son and fellow Eagle Scout Justin Walters (Mission Division, Indianapolis) notes that his father is the kind of leader who instituted a penalty of pushups for each time a scout showed up at a meeting without his uniform--and then joined the offender in performing the penalty.

“Our group is a well-mannered gang of all kinds of boys from different churches, different  backgrounds and families,” Pete says. “Troop 77 has not only brought them together as brothers, it’s attracting their fathers as well. Five of them are meeting with five of us men in the branch for an ad hoc sort of men’s group that meets twice a month. They love sharing their lives with one another and they’re telling their friends, who are asking us about it. Who knows where it will end?”