Six Make the Covenant in Appleton 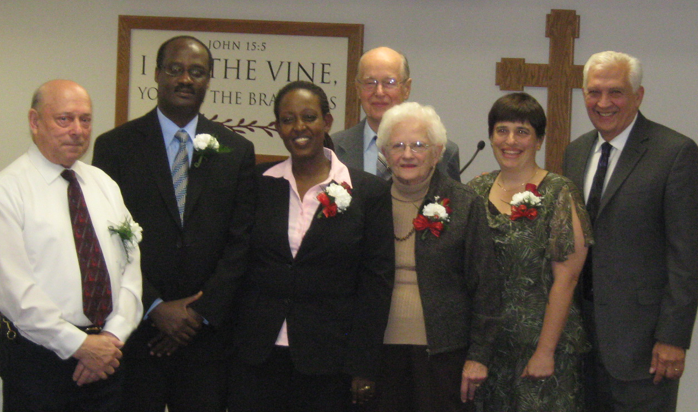 Six members of the Appleton branch made the covenant of the People of Praise on October 22. They include a married couple from Africa, a married couple in their 80s, a retired heavy equipment operator and a single woman who met the community through a church choir.

"The fact that this diverse group of people all found what they were looking for in the People of Praise speaks to the strength of our community life," says Steve Pable, head of the branch leaders team.

Egide Nimubona and Revocate Niyizonkiza both grew up in Burundi. They met and married in Canada, before a job change for Egide brought the couple to Appleton in 2002. Two months after their arrival, they went to the Appleton airport to celebrate with their friends and fellow African immigrants Peter and Ana Vakunta, who were welcoming their children to the US from Cameroon. The Vakuntas are members of the Appleton branch, and so many branch members were also on hand. Their enthusiasm made an impression.

"When I saw tears in the eyes of some of you waiting for those children, I thought, this is not a normal group!," Egide says. "I knew right away that this was the group for me."

Revocate says she was not looking forward to starting over again in Appleton after leaving friends and family behind in Canada. But the fact that community members call one another "brother" and "sister" made an immediate impression on her. "My brothers and sisters in the community have embraced me and accepted me the same way my biological brothers and sisters do."

Fred and Dorothy Gedemer were neighbors for more than 30 years who married after their spouses died. Between them they have 10 children, 34 grandchildren and 7 great-grandchildren, "and we've only been married for 10 years!," Fred quips. The Gedemers heard about the People of Praise from several branch members who were with them on a group trip to Israel. "We found the way the community thinks about the importance of serving others was a good fit with our perspective on serving. We're like-minded in that way," Fred says.

The only Appleton native in the group, Emily Siebers works for the book printer, R.R. Donnelley. She heard about the community from branch members in her church choir. "My favorite part of community life is simply going to the weekly meeting and talking to my friends," she says. "Actually, everyone in the group is a friend of mine!"

Ken Haen is retired from a career in heavy equipment that had him digging lakes in Florida, mining in Kentucky and building coal ships that travel the Great Lakes. He moved to Appleton for work in 2005, leaving behind close friends from a prayer group in Milwaukee. Like the Gedemers, he met David Lee and other branch members on a trip to Israel. "When we got back from the trip we had a party at the community center," Ken remembers. "I saw that this was what I had been looking for, a group where everybody looked out for everybody and you all had Jesus in your hearts."