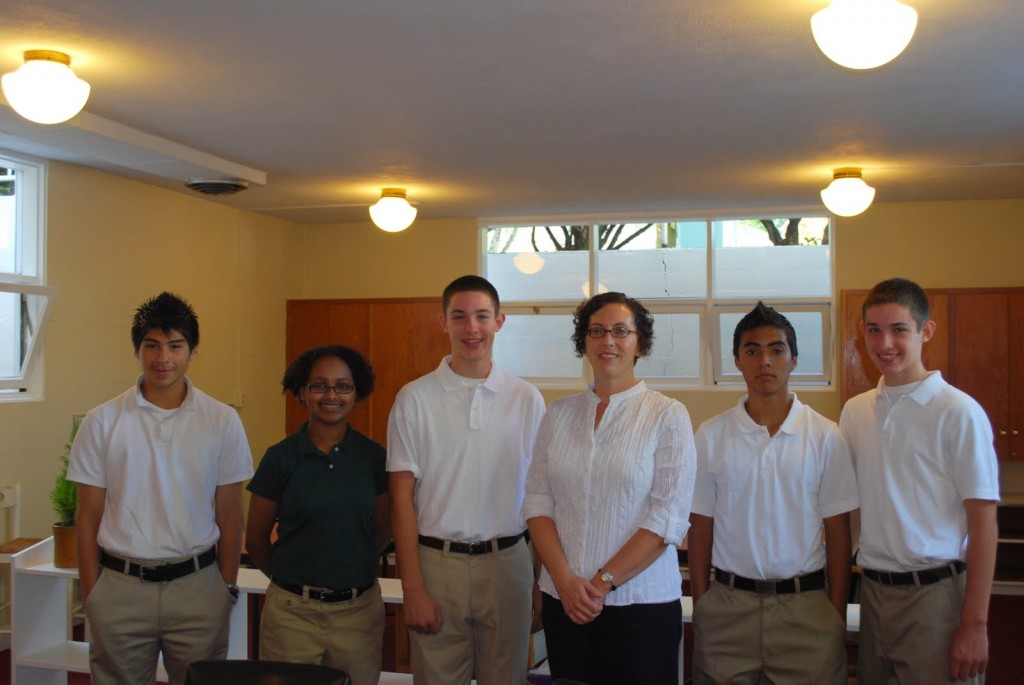 Trinity Academy opened its doors on September 6 with five students. Jo Clark (third from right) is the head of school.

Trinity Academy, a school founded by the Vancouver-Portland branch, opened its doors for the first time on September 6.  That morning, five ninth-graders and their parents walked into hurriedly painted classrooms in the basement of Northminster Presbyterian Church in Portland. Charlie Fraga, principal branch coordinator for Vancouver-Portland, was there to greet the students and parents, along with branch member Jo Clark, the head of school.

Two weeks before the school opened, the students and parents had a surprise when the location they had been planning to use for the school suddenly fell through. After a rapid review of potential sites, some school board members discovered that a church they had previously tried to contact, Northminster Presbyterian, had space available.

“We toured it the same day we heard about it and immediately saw the possibilities,” says Jo, “a 1,500-square-foot area with three classrooms.”
They signed a two-year lease, but that left only seven days before school opened to paint and prepare the classrooms.

“Over half the branch volunteered to help out with the painting,” Charlie says. Several students also pitched in to prepare the classrooms.
They moved the furniture in on the sixth day, and on the seventh day students arrived for their first day of class.

The students and teachers are following an adaptation of the Trinity School curriculum, though Trinity Academy is not a campus of Trinity School. Branch leaders hope the academy will grow toward that goal.

“The students have good attitudes, and they’re willing to learn and work hard,” Jo says. “We’ve really gotten off to a very good start.”