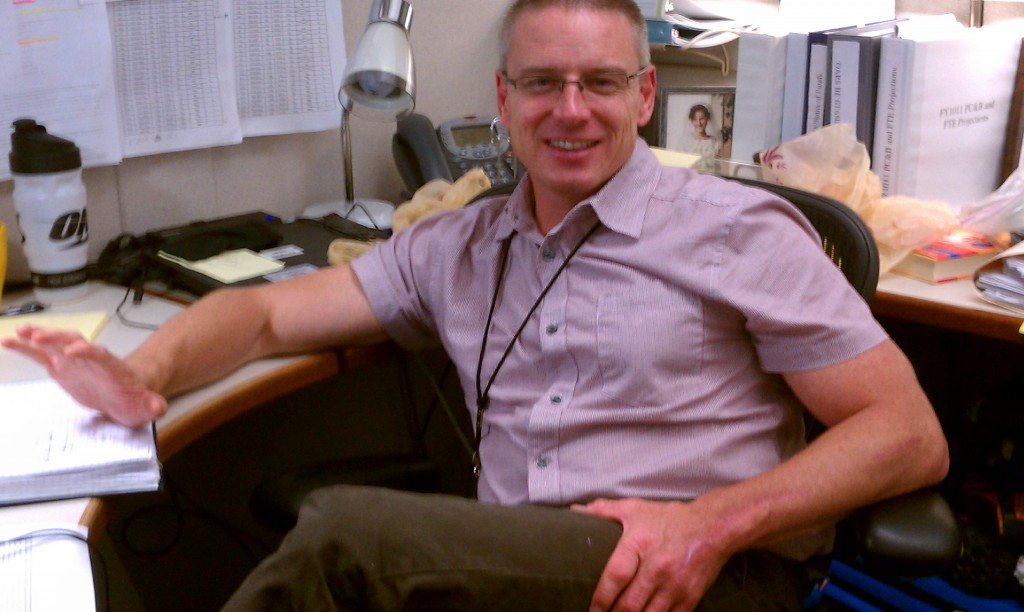 Chris Dietz (northern Virginia), a 45-year-old husband and father of two, has survived a bout with a rare flesh-eating bacteria that typically kills one in four of its victims.

The bacterial infection, known as necrotizing fasciitis, destroys skin, fat and the tissue covering muscles, and can lead to amputation of infected limbs. It’s unclear how Chris first came in contact with the bacteria.

The infection began suddenly on February 16. Chris woke up with his left hand swollen to twice its normal size. “My pain and misery increased throughout the day, and you could see red streaks radiating from my hand up my arm.” The doctor he saw that evening had him admitted to the hospital immediately.

The trouble only increased during his first 24 hours in the hospital. The doctors determined that the infected area needed to be surgically cleaned out immediately before the infection reached his heart. His lungs were also affected, says his wife Gina, and his breathing became so labored doctors had to intubate him and put him in the ICU. “The whole thing was happening so quickly, it was a shock to those of us who see him every day,” Gina says. “The doctor told me, ‘This doesn’t look very good; it’s serious and we’ll need to watch him closely.’”

Rick Ridenour, the coordinator for Chris’s area, spread the word quickly, and soon many people in the branch were praying. A number of people came to the hospital that evening to pray and sing with Chris. He started to breathe better as Thursday evening wore on, and in the middle of the night woke up feeling much better.

During the next two weeks, Chris had two more surgeries: one to clean out infected and deteriorating tissue and another to sew his arm back up.

He recovered so well that his doctors canceled plans for further reconstructive plastic surgery. “I’m amazed at the confidence I had in the Lord,” says Chris. “I had no fear at all, even though there were risks of amputation or death. That was a grace from God. In my mind there was no chance it wouldn’t work out.”

Chris says the prayers of his brothers and sisters in the People of Praise played a big part in his recovery. “I was talking to the Lord about it all, and I heard him say, ‘Chris, let me tell you what happened.’ Then I saw a vision of a kind of shield at the top of my left arm, which protected my heart from the infection. The Lord said, ‘That shield was the prayers of the people of your branch.’ ”

“The situation seemed so precarious,” adds Bill Brophy, “that all of us in the branch prayed with extra fervor. We felt like Aaron and Hur, who had responsibility for holding up Moses’ arms to win the battle.” (Ex. 17:12).

“Of course the whole time the branch gave us tons of other support as well,” says Chris, “taking care of our kids and providing for meals, laundry and housecleaning. I loved all the visitors. We’re back to normal. I’ve returned to my job as a senior budget analyst for the EPA. I was in physical therapy for my hand, and it’s fully functional, despite having fewer tendons. My wounds are healed, and the array of scars on my left arm is actually quite impressive! My doctors say I have nothing to worry about.”