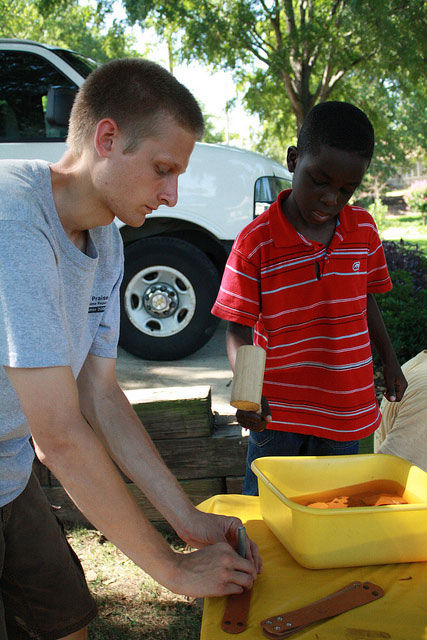 In June, Action volunteers from around the community took to the road for their tenth summer of work projects. The teams began major renovations to two Indianapolis homes, started a series of repair projects for Allendale neighbors, and restarted the annual summer camp for Allendale children.

This year’s camp has already broken previous attendance records. “Forty-three kids showed up for opening day,” says Catherine Bulger of the Allendale summer staff, “about 10 more than last year’s opening day. Our second day was larger than the biggest day last summer, and our third day we surpassed even that: 57 kids.” Attendance is expected to increase again after summer school sessions let out.

“The higher number of kids forced us to stretch and regroup a bit,” adds Ben Reinhardt, leader of the Action efforts in Allendale this year. “But the summer is off to a great start.”

Ben and other staff members lined up 12 home-repair projects for Allendale neighbors, and they are also planning improvements to some of the properties owned by Christians in Mission team members on Yale Avenue. The crew really appreciated the experience of Ed Konczesky (Tampa), who is a licensed contractor. With his help and some donated building materials, they were able to rebuild a porch for a neighbor instead of just patching it. The team has also started sealing gaps in some CIM houses which birds had decided to build nests in. They have also begun to insulate pipes underneath the houses. “It feels funny to be insulating pipes when it’s 97 degrees out,” says Ben, “but last winter the pipes froze beneath several of our houses, so it needs to get done.”

In Indianapolis, the first of three Action teams has concluded its work. “We made major progress on our main goal of renovating two duplexes,” says Paul Hommes, who is managing the work projects. “The first, 1436 Montcalm in the Triangle, needed repairs to prepare it for a new student household. We’re putting the two units back together to form a single-family house.” 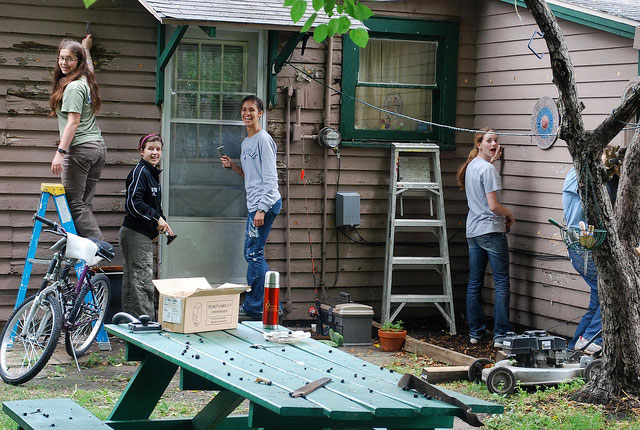 In reuniting the two halves of the duplex, they needed to knock a hole in a load-bearing divider wall to install a door. “You don’t want to make more holes than necessary, or run into plumbing or electrical wiring, so you have to be careful,” Paul explains. “We finally chose a spot, only to discover--once we cut through a layer of plaster--a complete, useable door frame already in place hidden in the wall.”

Paul made ample use of the building skills of Jack Busekrus (Oahu), who came to Indianapolis with his wife Haidy for their second Action trip. “Jack is 77, yet after a full day of demolition, even working during breaks, he was still smiling and energetic,” says Paul. “He was an amazing example.” Haidy didn’t have much construction experience, but, she says, “Paul did a good job of finding things that I could handle, such as going on errands, cleaning tools and organizing them. I appreciate that, as well as the loving care of Walt and Pam Seale, who made sure all our needs were met.” 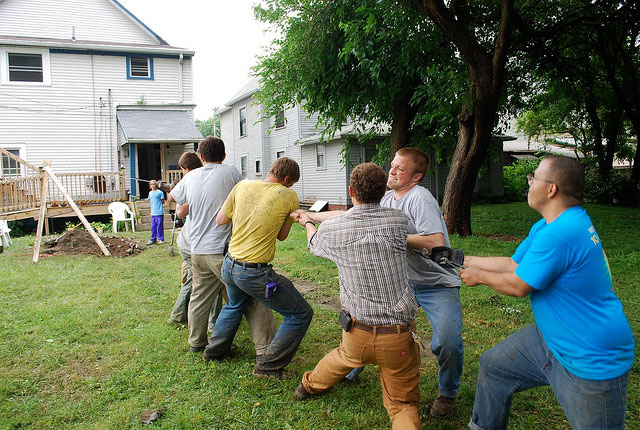 In the backyard of the duplex in which the CIM men live on the South Side were two large clumps of cement in the ground that had once secured fence posts. It took seven young men to get the first one out, but the second had to be broken up before it could be removed. (L-R): Peter Kress (northern Virginia), Jonathan Willard (Servant Branch), Matt Rubio (northern Virginia), David Gruber (Indianapolis), John Burke (Rockford), Paul Hommes and Kevin Schmidt, a South Side volunteer.

The second duplex targeted for renovation is on the South Side, where it will eventually house CIM team members. “It’ll be a while before it’s fit for human habitation,” says Paul, “but we had to take the first stab at it.” The place reeked of urine and dog feces. “We scrubbed just about everything we could see with bleach,” said team member Caityln Conlon, a 15-year-old sophomore from Muncie. “The whole trip involved a lot of cleaning. I helped shovel enough dirt from inside and outside of one house to fill 50 trash bags. This trip was one of the best things I’ve ever done!”

On Saturday, June 11, the first team joined local CIM members, Triangle residents, members of the Indianapolis branch and South Siders for the now traditional neighborhood block party on Karcher Street. This year a prayer meeting followed immediately afterward to celebrate Pentecost, which was the following day. Mike Coney, head of the local CIM team, says at least seven children and teenagers were prayed with to be baptized in the Spirit that evening.

Mike Zusi, Action program office coordinator, notes that there is still room for a few more adults on the later trips this summer. E-mail him at [email protected] for more information.