Kingston Holds Lessons and Carols For 300

The Kingston branch hosted a Festival of Lessons and Carols in Holy Trinity Cathedral in December.

The Kingston branch held a large Festival of Lessons and Carols on Sunday, December 19. Ushers estimated that 300 people attended the ecumenical service, put on by the 30-member branch.

“In previous years we held the service in the high school performing arts hall where we normally meet, which can hold 100 people,” says Kevin Rodriguez, one of the organizers of this year’s event. “But it’s been on our hearts to share the experience with more people.”

There was no shortage of space in Kingston’s 100-year-old Holy Trinity Cathedral, site of this year’s service, which the branch put on in collaboration with members of the cathedral parish. Kingston’s Roman Catholic Archbishop Donald James Reese offered a welcome to the crowd. 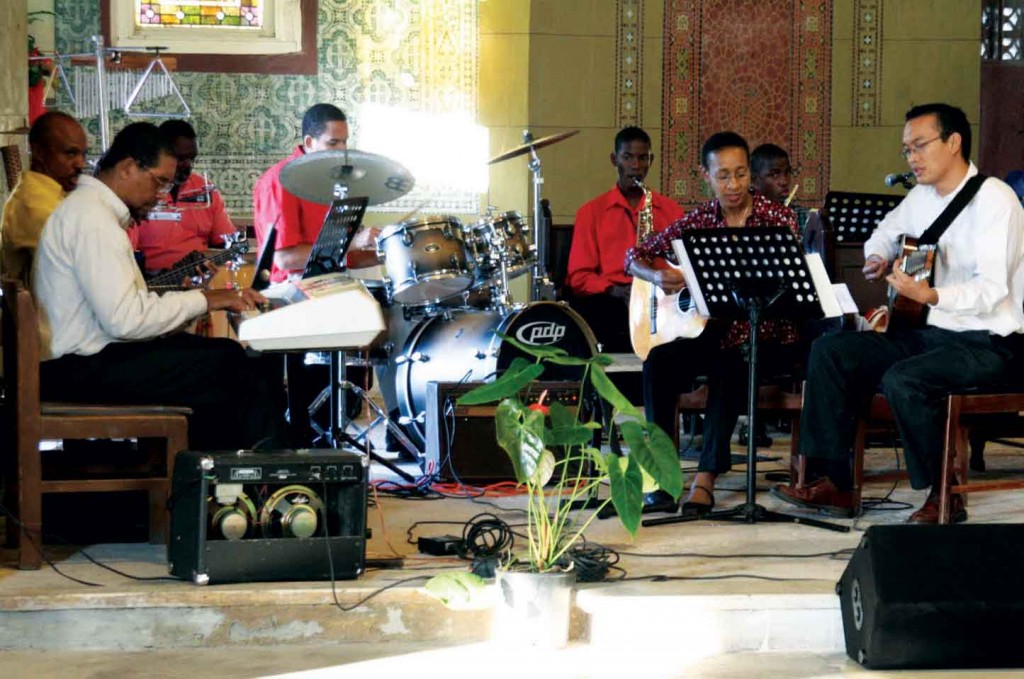 The Kingston branch music ministry with guest instrumentalists from the Alpha home for boys.

Branch member Sam Davis gave one of several reflections during the traditional pre-Christmas service, which includes a series of reflections and Scripture readings interspersed with Christmas hymns. “The new people I encountered were very, very happy to be there,” he said.

Three guest instrumentalists from a nearby home for boys added saxophone, flute and clarinet to the usual bass, drums and guitar in the branch’s music ministry, and another guest played the keyboard.

Branch members pitched in to promote and prepare for the event. “I handed out flyers at my church. I also brought along family members and they loved it,” said Dorothy Over.

“The event put us in the mood for Christmas by reminding us what it’s really all about,” added Dawn Keaveny..

Holy Trinity’s pastor has already invited the branch to host the event again in 2011.