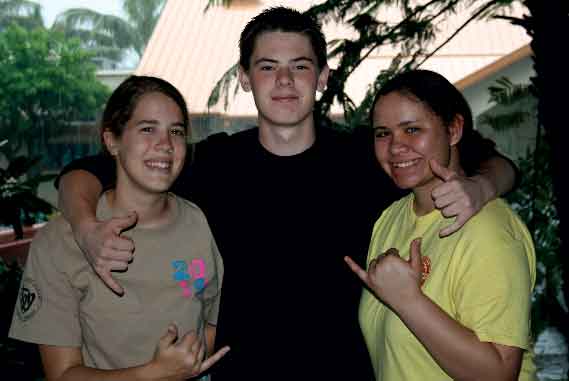 Three high school students have come underway in the Oahu branch. Action trips, the community’s music and a desire for Christian friendships all played roles in attracting the students.

Zach Busekrus has many family members in the community. His email address includes the phrase “Busekrus and proud of it,” but he says it wasn’t obvious that he would follow the family tradition. “My Action trip to Indianapolis changed my perspective,” he says. “I saw that the community is trying to make a difference in the world. I wanted to be a part of that.”

He already has some solid experience as a difference-maker. Last year, Zach organized classmates to produce a video on the genocidal violence in the Darfur region of Sudan.  The video, “One Day for Darfur,” combines an interview with a Holocaust survivor and some graphic footage of genocide victims, accompanied by a reggae tune. The video won first prize (out of 500 entries) in the Youth Xchange Video Competition sponsored by Hawaii public television. It also caught the attention of eBay founder Pierre Omidyar and his wife, Pam, who have helped Zach and his classmates meet some Darfur aid workers and refugees, and have also funded some of their activities.

Racquel Kaikanani Leong hadn’t heard of the community at all until she started tagging along when her mother was working at the parish where the branch meets. She noticed the sound of singing echoing out of the church basement. “There was something about the music that drew me in,” she says. “It was like a calling, and it intrigued me to no end.” She eventually spoke to Mike Busekrus, Zach’s Dad who invited her to a meeting. “I checked it out, and I soon joined Action and loved it.” Racquel traveled to Allendale last summer and came underway in the fall. Her interest in music and songwriting have led her to start writing raps, and she performed one of her compositions at a recent branch meeting.

Rachel McCabe first considered coming underway after seeing the community’s impact on her sister Mary (Servant Branch), now a student at the University of Minnesota. But before making the decision to join herself, she went on two Action trips to Allendale. “Allendale’s day camp and home-repair projects make it a cool place for people my age who love God,” she says. The opportunity for Christian friendships in the Oahu branch also helped draw her in. “People in the community have God in their lives. It’s hard to find people on fire for God at school,” she says.

Oahu branch leader Tom Duddy says he’s grateful that the Lord brought these three students into the People of Praise. “They add enthusiasm and energy to our branch, and that encourages us all.”