Hitchhiking On Faith In Southern Indiana 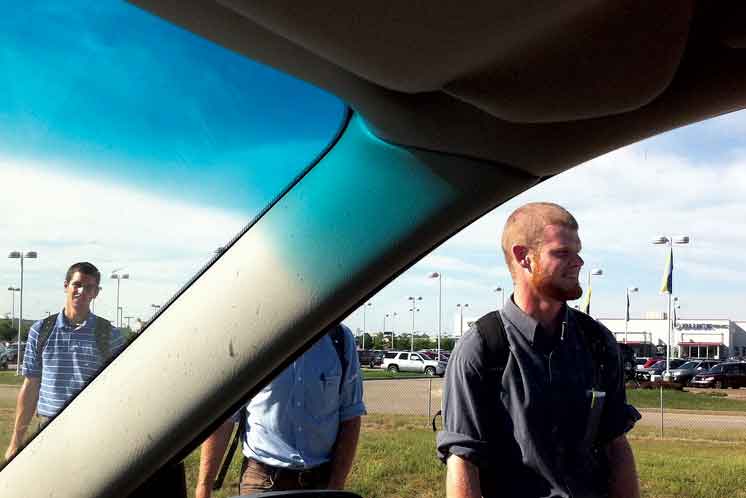 The Evansville missionary men finished their third of three hitchhiking trips through the cities and rural towns of southern Indiana in mid-September. In the spirit of Jesus’ earliest disciples, they set out without food or coin. They carried only a few possessions—Bibles, songbooks, water bottles, cell phones and one change of clothes each. They begged meals, rides and places to stay, offering strangers in towns like Chandler, Booneville and Rockport the same prophetic message: God wants to unite everyone in the Mississippi Valley in Christian community.

They came through the trips healthy and with stories to tell—of impromptu prayer meetings held in kitchens and dining rooms, of strangers prayed with for healing or baptism in the Holy Spirit, of fellow Christians who took care of them along the way.

“We never slept outside and we never missed a meal,” notes Rus Lyons, who led the trips, which involved three missionaries each. Along with Rus, Joe Bulger, Peter Coleman, Ryan Hardin and Peter Putzier participated.

All told, the men prayed with more than 15 people to be baptized in the Holy Spirit, led two teenagers to dedicate their lives to Jesus, and witnessed a woman healed of chronic pain. Sometimes the timing of their arrivals was better than anyone might have planned.

In Terre Haute, in mid-July, during their first trip, they dropped by a campus ministry building near Indiana State University, and found six students who had been discussing living together in Christian households. The missionaries proceeded to lead several prayer meetings for students and prayed with one man for baptism in the Holy Spirit.

Later, in the same city, they were knocking on a door when a woman fell from her bicycle and spilled a backpack full of groceries onto her front lawn. “Are you Christians?,” the woman asked as the missionaries helped her pick up the food. “I saw you knocking and knew it was the Lord who sent you.” The missionaries prayed with the woman and her son to be baptized in the Holy Spirit.

Another Terre Haute woman invited the missionaries in for a meal, where they were joined by various relatives and friends. They discussed Christian community and ended the evening singing and dancing together around the dining room table.

Their second trip took them to Washington, Indiana, where a man told them that he had been praying for several months about living with other Christians. He asked to come visit the missionaries in Evansville to learn more about community.

Several people in Washington told them about Matthew, a serious Christian interested in community. The missionaries located his house, where Matthew and his wife invited the missionaries in for a meal with three friends. Later that night the group asked the missionaries to teach them how to have a prayer meeting. All five asked to be baptized in the Holy Spirit and several in the group spoke in tongues.

Later, Matthew called Rus to tell him about the ripple effects. He had prayed with 10 people at his church, and those 10 had prayed with many others in their congregation.

On the third hitchhiking trip, a woman named Angela drove the missionaries to Dale, Indiana (pop. 1,200). As they drank Powerades she’d bought them, they explained their goal of finding people the Lord had been preparing for Christian community. “You’ll find the people you’re looking for today,” Angela said. The men also prayed with her for wisdom in raising her 15-year-old son.

That night, the missionaries were getting hungry and wondering where they would stay. As they walked the streets praying, they came upon a man, Peter, building the framework for a wooden deck. They asked for some food, and Peter’s wife, Carolyn, agreed to make them a meal and to put them up. The men spent their evening helping Peter with his deck and talking with Peter and Carolyn about baptism in the Holy Spirit. Carolyn had already been prayed with, but the men prayed with Peter for baptism in the Spirit and prayed with Carolyn for chest pain, wrapping up their prayers around midnight. Carolyn was feeling well enough to complete a 5K race the next morning.

Mission program coordinator Nick Holovaty says the missionaries will likely continue to make short hitchhiking trips. “When the brothers go out hitchhiking, they’re doing it on behalf of all of us, carrying the word of the Lord to the people he loves throughout the region.”