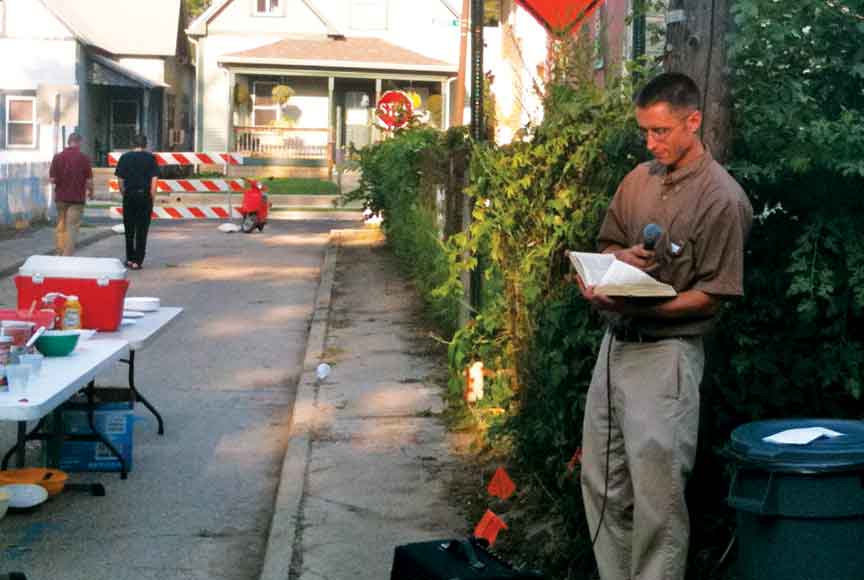 David Zimmel giving a teaching at a barbecue on the South Side of Indianapolis. Photo credit: Walt Seale.

When David Zimmel heard a knock on his door in the middle of the afternoon, he had a pretty good idea who it was—Jimmy, an 11-year-old neighbor boy who often comes over. (David is the head of our Christians in Mission team on the South Side of Indianapolis.)

Jimmy said he wanted a couple of bucks.

David asked, “What for?”

“A Mountain Dew for my mother.”

“I can’t give you money and we don’t have any pop around,” David said. “But you know what? We could pray for some, and God could give it to you. If God wants you to have some pop, he’ll take care of it.”

The two prayed quickly, then they both forgot about it.

The next day, Mary Claire Busk, also a member of the CIM team, called David from the pottery shop where she works. She asked, “Do you want some soda?”

The shop had received a new delivery and wanted to get rid of their older cans. “I brought home cases and cases,” Mary Claire said, “maybe 300 cans.”

“We managed to give half of it away immediately,” says David, “making sure a case of the Mountain Dew went to Jimmy and his mom, and the diet soda to some diabetics we know.”

A few days later, David was visiting Jimmy’s family and wound up talking to Jimmy’s Dad about praying for healing. Jimmy’s Dad had a hard time believing that God could heal someone.

“I brought up that God could even answer prayers for Mountain Dew,” David remembers.