The Allendale neighborhood blanketed in snow. Photo by Margaret Bulger.

by Catherine Bulger with reporting by Chris Meehan

Brothers and sisters in Shreveport are riding out epic winter weather and a calamitous cold snap. Starting on Sunday night, two separate systems rolled through the area, bringing snow, freezing rain and plummeting temperatures. On Tuesday, the thermostat dropped to one degree Fahrenheit, the coldest recorded temperature in the city since 1930.

The city has issued a boil advisory for all drinking water. City water mains are broken and many pipes throughout the city are cracked or frozen. Water pressure is very low. Traffic on the highways is at a standstill, and all flights out of the airport were canceled earlier this week. The unplowed streets are blanketed with layers of snow and ice, and most businesses are shuttered.

Snow in Shreveport very rarely lasts for more than a day, so the city doesn’t invest in road salt or snowplows. “The biggest challenge isn’t that it’s gotten cold or that it snowed, but that it dropped below freezing on Sunday and hasn’t gotten warm yet,” according to David Zimmel, the mission coordinator for the Allendale outreach.

Many community members in our Allendale Mission team and in the Shreveport branch have little or no running water. “We have to be careful about water usage,” says Shreveport branch leader Jack Lynch. One sister in the branch has no heat. Two families had carports collapse under the weight of ice and snow. Praise Academy is closed, as well as many community members’ workplaces. Everyone in the community is safe, checking in with one another in person and by text message.

“This is the worst weather I’ve seen in a long time. We built our house in 1991 and we’ve never had our pipes frozen before. We’ve never had water pressure this low,” said branch member Cliff Vaughan. 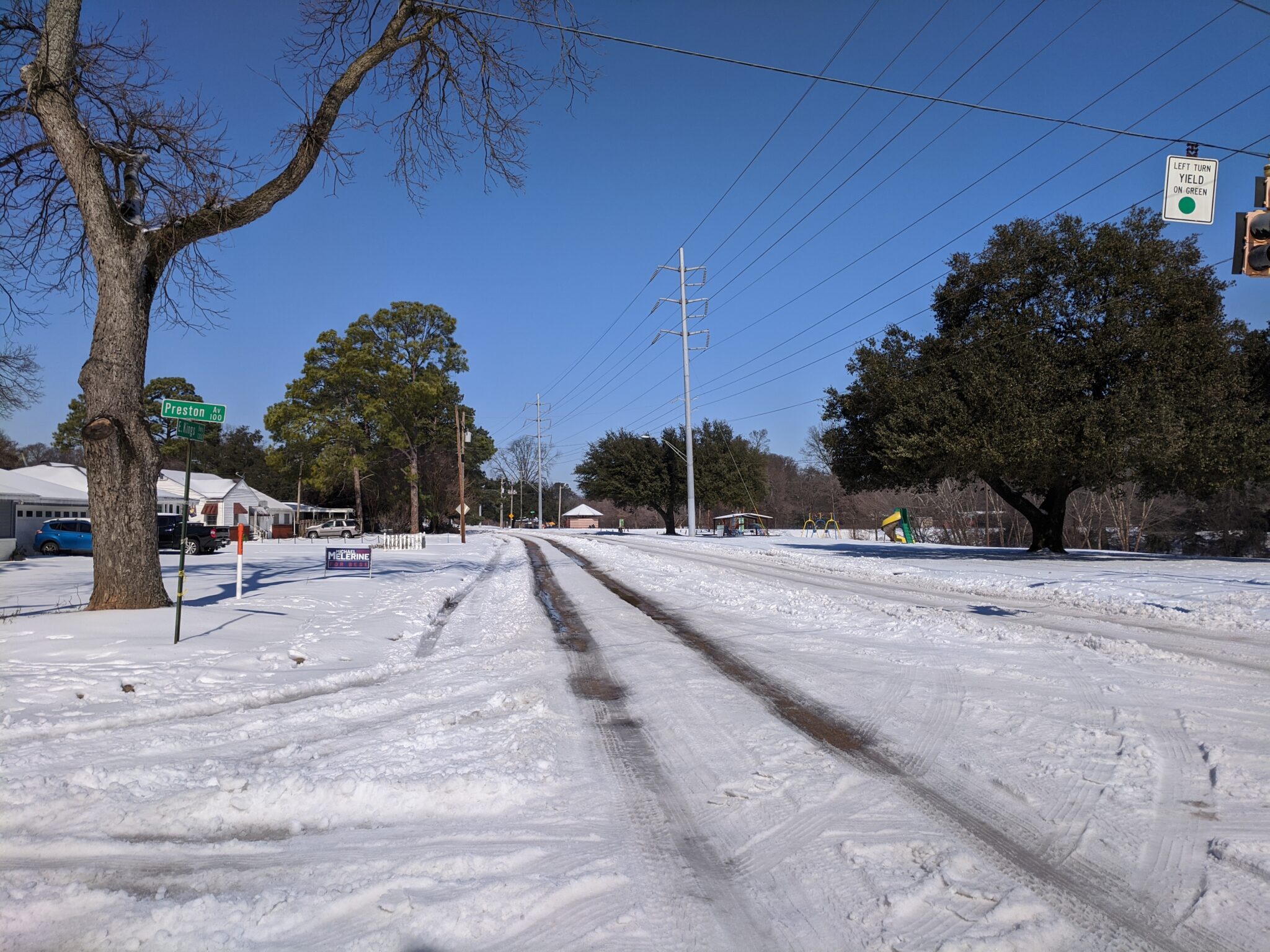 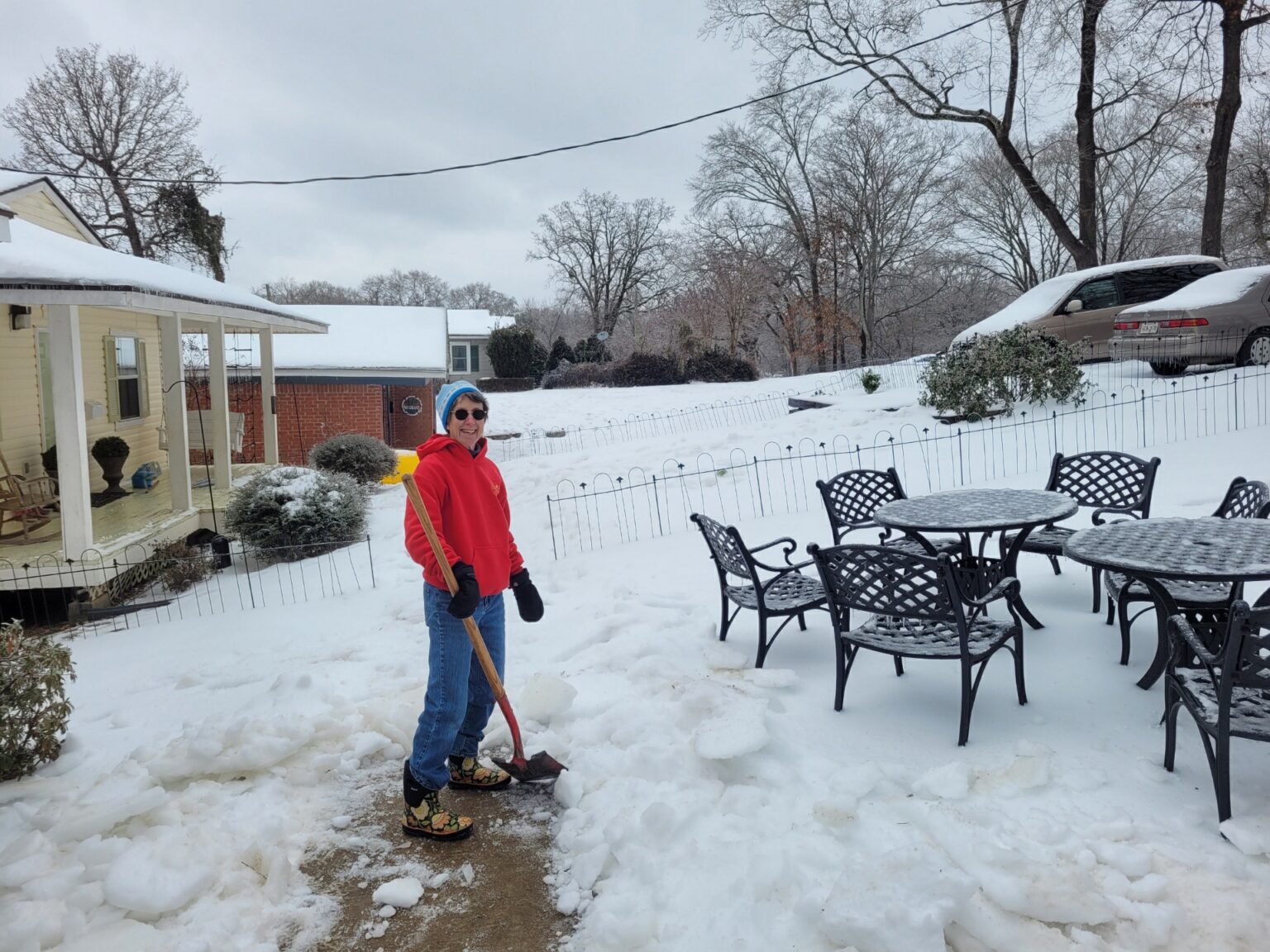 Jo Zimmel shovels with the tool at hand. Photo by David Zimmel.

In Allendale, the Mission team members have been helping one another and their neighbors as best they can.

Paul Hommes, an engineer by training, has been working since before it got cold to keep water running to some of the houses, building plastic tents around the pipes, crawling under houses with a heat gun to thaw frozen spots, and clearing mineral buildup out of clogged aerators. On Wednesday morning, a number of Mission team households woke up to no running water at all, but thanks to Paul’s efforts, several houses did still have water.

“The last time the temperature dropped into the teens overnight, all the pipes to our houses on Yale Avenue froze. This week, we’ve had temperatures in the teens five nights in a row, and we still have water. I am certain that without Paul’s work, we would not have water right now,” David said.

Thomas Duddy hauled out the big, orange five-gallon jugs that Action uses for its summer day camps and drove back and forth in John and Colleen Bowar’s all-wheel-drive SUV, delivering water to those who needed it. David and Thomas also brought water to several neighbors. 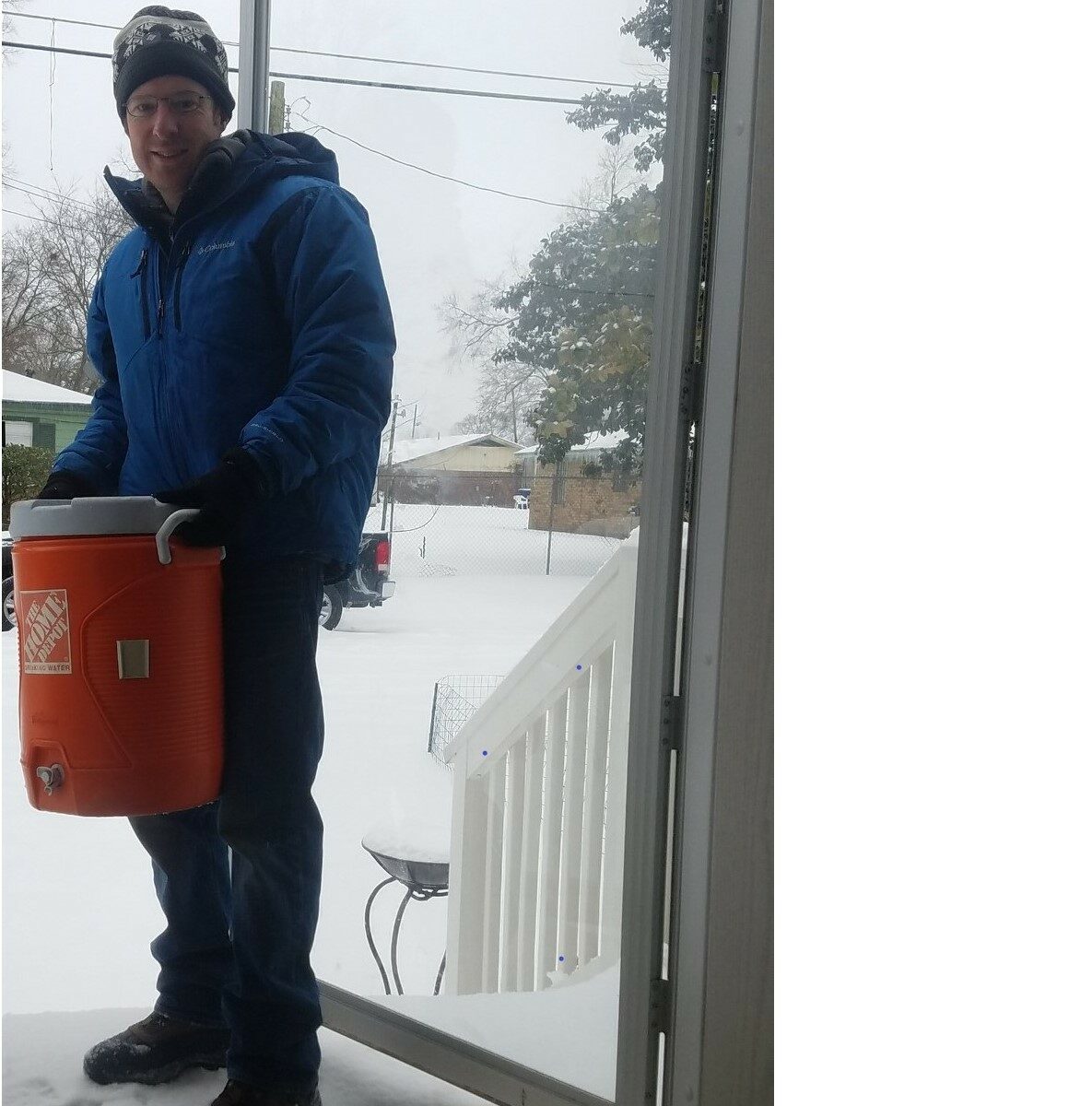 Evan Lent and Abby Earhart went to check on a woman in the neighborhood, and she asked them for food. Abby remembered that she’d received extra food by mistake in her last week’s grocery order—frozen chicken patties that the woman, who has no stove, could cook in her microwave. Evan and Abby put a food box together for her.

When the snow started, Kathleen Reinhardt felt moved to clean out her guest room, which had been gathering dust and storage items throughout the pandemic. Next door neighbors Joe and Gianna Bulger were grateful to use it when their furnace failed to keep their older house warm.

The Bowar family took a break from flushing toilets with snowmelt and washing dishes in pots on the counter to go sledding, using cookie sheets as sleds.

“I’ve been impressed by our neighbors,” says David. “They seem to be really smart about how to deal with this. For instance, we have people who haven’t had water for half a week, and here’s a woman offering us a case of bottled water, because she had four.

“People are hunkered down. I went to help a neighbor light a heater, and he was in bed with a mountain of bottled water and food beside him, waiting out the storm.” 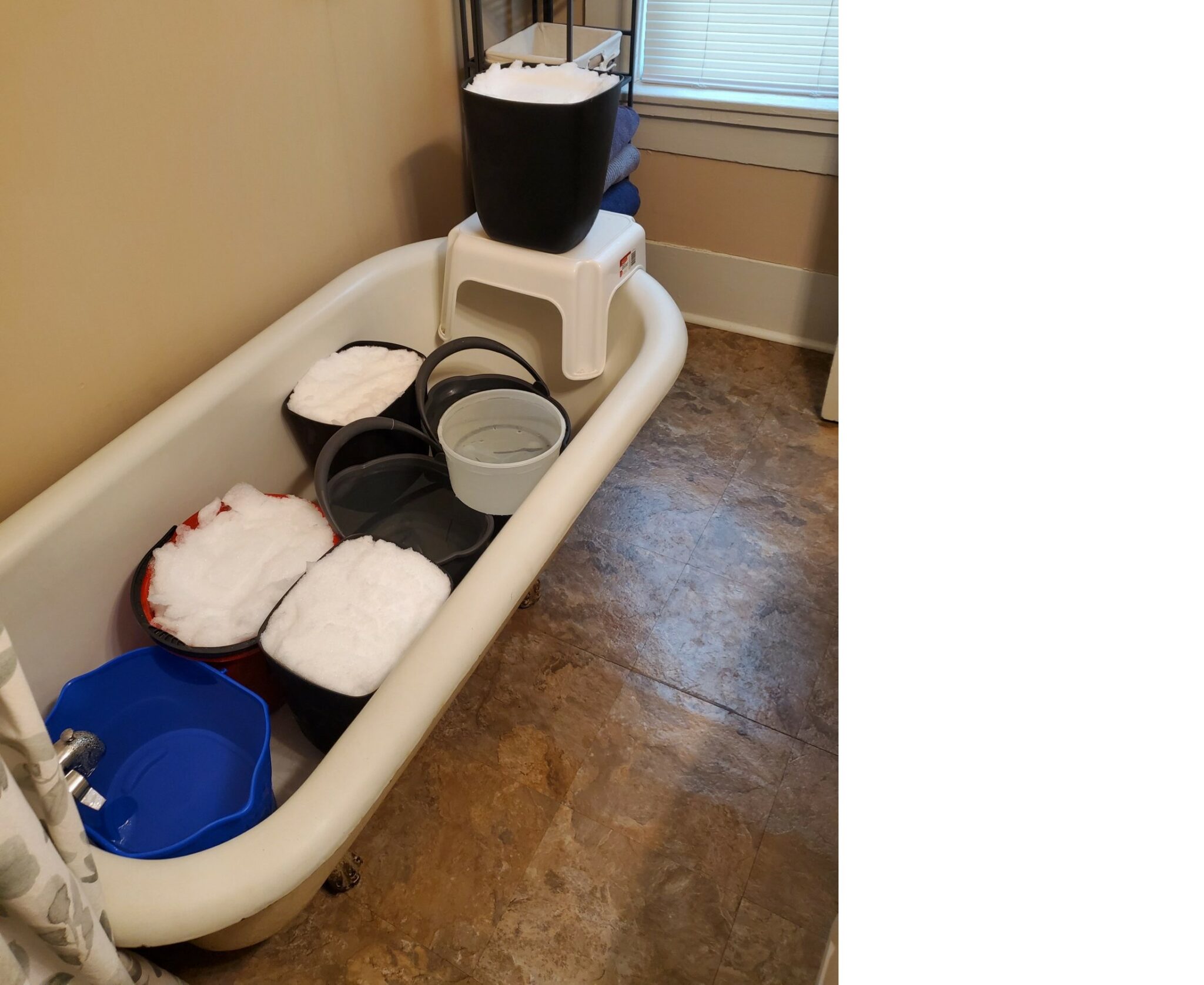 The Bulgers melt snow in their bathtub. Photo by Joe Bulger.

The forecast for Shreveport shows temperatures warming into the 40s on Saturday. Soon, the snow will melt and the roads will clear, but there may be lingering damage from the storms.

Jack says, “They’re not going to be able to get around to fixing these water lines, they don’t believe, until Saturday. There are probably several breaks in the lines throughout the city. I think it’s going to be some time before things are back to normal.” Paul expects that a lot of pipes in the neighborhood have burst, so some people may not have water even after it warms up.

Community members in Shreveport ask for prayers for the next couple of days, that everyone continues to have power and water, and for the cleanup throughout the city afterwards, especially that there is not too much damage to pipes.