Be sober minded. At all times there is great sorrow and great joy in the lives of those around us.

It was Thursday and one of our neighborhood friends had been telling us for days that he wanted to cook for us.

Thursday is melange day, a day where we combine and eat all our leftovers. We had a ton of tasty leftovers and on top of that, our friend was able to join us for dinner and decided to cook up some deep fried pork. We barely had enough room to fit all the food on the table. Our eyes, minds, and hearts were on the food. Surely a gift from God. We sat down and started serving the food. We laughed and joked around knowing that our day was over and all that was scheduled for the rest of the evening was food, fellowship, and sleep. Then Rus's phone started ringing. It was Job.

Job is a quiet, sober, young man. Whenever we met Job he was caring for us two year old son. His son had been living with him for the past nine months. His girlfriend had left Job for another man very early on and had left the child in his care. Job first came over to tell missionaries that he and his son were getting evicted and were soon to be homeless. He told us that everything seemed to feel better after he talked to us. We went and visited him a week later. He moved into his friend’s small apartment with his son. It was obvious that Job was doing better. One clear thing was his love for his son. I saw him smile once or twice, and each time it was due to something his son was doing. We said goodbye and promised him we would try to see him again sometime. (Con't below photo) 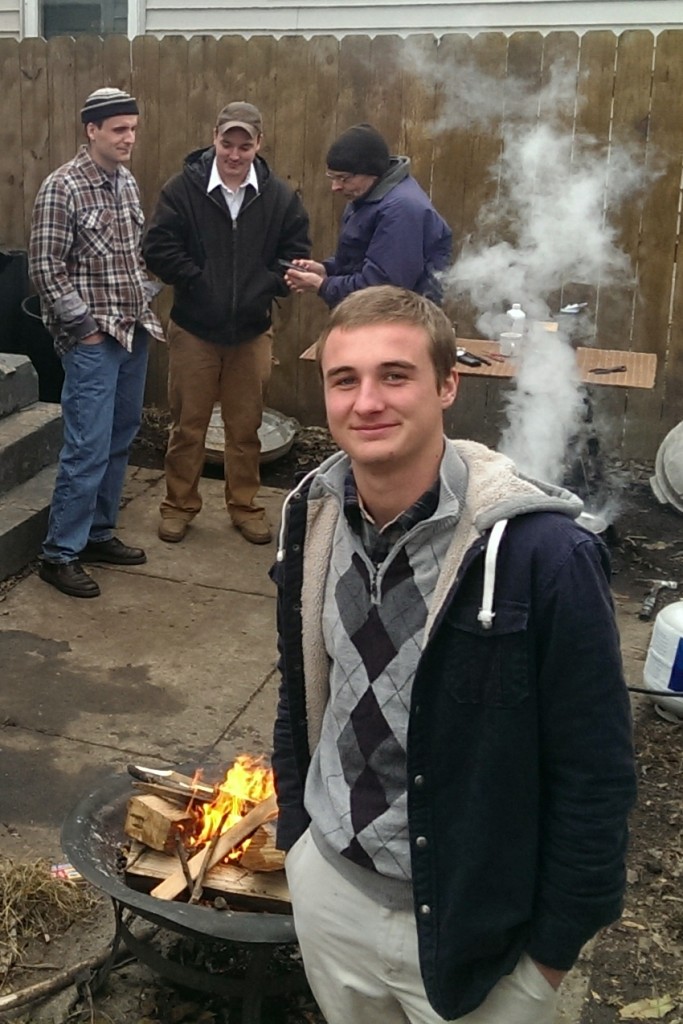 At dinner, that Thursday evening, began, Rus picked up the phone. His face turned serious. He walked away and talked on the phone in the corner for a while. He turned to us saying, ”The cops are at Job’s house. His wife is trying to take his son. I'm gonna go over there and try to settle things down."

We all prayed together, and Rus went on his way. Our conversation was much more sober for a while as we discussed the situation. Slowly, however, our conversation became much more jovial. We devoured the scrumptious food and began laughing once again. The food was so good that night. Compared to what we usually had, the pork tasted divine. The only thing that could get my mind off the food was a full stomach. The time flew and then the back door opened.

It was Rus, and he looked torn up but chuckled when he saw our wonderful dinner. Rus told us, ”Job’s ex-girlfriend took the child, and the cops couldn't do anything about it. Job had no way to fight back legally, and the mother claimed that she had been taking care of the kid all along. Job was irate"

While listening to what happened, we all were hushed and some of us were holding back tears. Job's former girlfriend simply came and took the child from Job's arms. There was nothing Job could do about it. Job was powerless. When the mother drove away all Job could do was silently cry. His child and his pride had been taken away from him. Rus drove Job to a friend’s house for the night. On the way Rus and Job discussed what to do. Job could easily go take the child back from the girlfriend but that would land him in prison. There wasn't much Job could do. He was homeless and now childless and brokenhearted.

Job is our neighbor. When we hear stories like Job's, we want to help. When we love them we share their sorrow and when they love us they share our joy. Lord, give us a heart for the hurting, the lost and the brokenhearted.