Since 2016, Joe Gleason (South Bend) has been on assignment from the community to work as an editor for the film director Terrence Malick. (Malick’s 2011 masterpiece The Tree of Life was recently named the number one film of the decade by the Associated Press.) The film Joe worked on has been playing in theaters since December. It’s called A Hidden Life.

A Hidden Life tells the story of Franz Jägerstätter, an Austrian farmer and devout Christian who was executed by the Nazis in 1943. The title of the film comes from the 19th-century novel Middlemarch, by George Eliot, “for the growing good of the world is partly dependent on unhistoric acts; and that things are not so ill with you and me as they might have been, is half owing to the number who lived faithfully a hidden life, and rest in unvisited tombs.”

Writing in The Wall Street Journal, critic John Anderson said, “With A Hidden Life and the story of Franz Jägerstätter, the director [Malick] has found the ideal vehicle for his cosmic inquiries, and has created a film that is mournful, memorable and emotionally exhilarating.”

He added, “The editing, by Rehman Nizar Ali, Joe Gleason and Sebastian Jones, is superb.”

In a note to community members, Joe wrote, “I cannot adequately express my gratitude for the gift of this amazing community. I may be temporarily in a different city, but my heart is and always will be with the People of Praise. Thank you for your prayers, love and support as I’ve worked on this once-in-a-lifetime project.”

In this issue of V&B, we are delighted to publish two essays about A Hidden Life written by community members Andrew Zwerneman (northern Virginia) and Elizabeth Pease (Servant Branch).

Elizabeth Pease's piece is presented below. You can find Andrew Zwerneman's piece here. 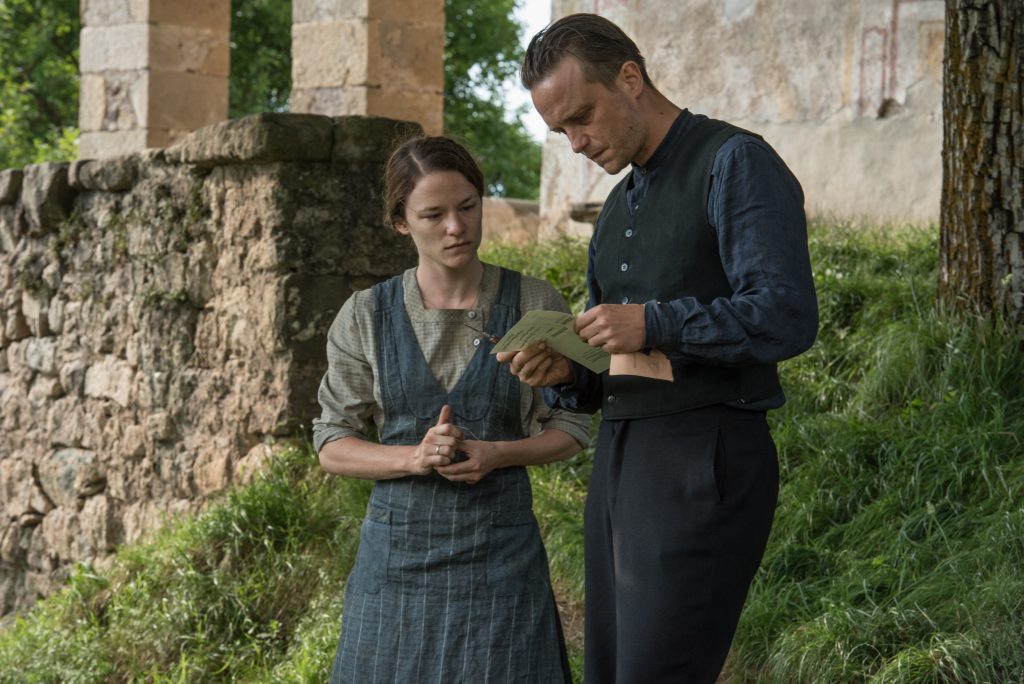 Franz Jägerstätter was a man whose motivation came from the constant conversation he had with an invisible and inaudible friend—the God he chose to follow to the cross. Drafted to serve in the Nazi army during World War II, Jägerstätter refused to take the required oath of loyalty to Hitler and was guillotined for it, leaving behind his wife, Franziska (Fani) and three small daughters.

On the surface, this outwardly clearcut plot (the brutal ending is never in doubt) accompanied by a complex inner struggle seems an unlikely fit for the visual medium of film. But in Terrence Malick’s A Hidden Life, a combination of effects—scenes of rural beauty, snatches of real letters between Franz and Fani, crescendos of music and the oppressive drones of Nazi planes—forms a symphony that helps those of us on the outside see and understand what’s happening within. Malick’s latest film shows us the hidden life of a Christian couple, two ordinary people deciding with God how to respond to the good and evil of their time.

Since his 1978 Days of Heaven, Malick has become famous for exactly this—letting us in on the inner landscape of his characters. We hear their fragmented thoughts and bits of what others have said to them in voice-over. Repeated images or phrases of music become symbolic triggers associated with a particular emotion or idea, like the way a certain smell can put us immediately back in a memory.

A Hidden Life opens by introducing some of the notes that will be used to create the symphony. There’s a voice-over from Franz, “I thought we could build our nest high up . . . fly away like birds to the mountains . . .” His voice is interrupted by Nazi propaganda footage—a plane, Hitler waving to adoring crowds, a giant bonfire. Then we see the Jägerstätters at work on their farm, and the Austrian mountains bathed in sunlight. There’s the sound of wind, and there’s running water: a waterfall, a river. These are the symbols of the heavenly nest birds fly away to.

Another early sequence provides our first introduction to the voice calling Franz. With the camera inside a dark doorway looking out to the sunlit mountainside, Franz enters the town’s small church and pulls the bell rope. He walks alone to the edge of a field where the forest begins. There’s a soft swell of music. The camera sweeps away from Franz and upward to the treeline, to the sky and sunlight. Franz looks sharply over his shoulder, and we wonder, who’s there? What has he heard? On the mountainside, a blindfolded and smiling Franz stumbles after Fani and the girls, who creep silently around him, hitting metal jugs with spoons. He knows they’re present, if just out of reach.

Later, Franz stands in the light outside a dark doorway, and walks away from it. Storm clouds gather over the mountains. Hearing thunder, Franz looks up from his work in the field and over his shoulder into the distance. A moment later, he paces in the sunlit vestibule of the church. This time, Franz acts on his experience with that voice—he’s made a decision. He walks with his parish priest on the road outside and voices the fateful words for the first time, “Father, if I’m called up, I can’t serve.”

Doorways from darkness to light loom over Franz’s decision. He stands inside doorways peering out to the light. Looking out the doorway of a sawmill to a bright orchard, he and Fani discuss his choice. A neighbor asks, “What are you going to do?” over a shot of the dark doorway, looking out to sun-drenched cows outside.

The cross Franz is choosing comes into stark focus as he approaches his church one day. On the way he pauses to gaze at a crucifix beside the road. Inside the church, Franz listens to a painter who bemoans the sentimentality of his murals. “I paint their comfortable Christ, with a halo on his head. . . .” At the word “halo,” there’s a shot over Franz’s shoulder, with the dappled light through the leaves playing on his cheek. Malick is linking Franz to the halo and, by extension, the cross. “Someday,” says the painter, “I’ll paint the true Christ.”

Fani is the first one to notice a change in Franz. “These last weeks you’re different,” she says. It hurts Franz to see Fani endure the slights of their neighbors, who spit on her in the town and throw mud at her children. Her opinion is vital to him, and we see her react to his dilemma more than once hoping for some other outcome. Again he’s looking out a doorway, and next to him she looks out too and asks, “When have our prayers not been answered?” She questions him in the orchard, “You could work in a hospital. There’s nothing wrong with that, is there?” But while Franz stands in a doorway to light, Fani is repeatedly shot in the dark against the inside wall of the barn without a doorway—only chinks of light coming in through the slats.

Images give us the presence of evil too, harkening back to the bonfire in the black and white Nazi footage. Early on, we see Fani at a bonfire with drifting smoke. Then later, the mayor moves frenetically around a bonfire, gesturing to gathered men in Nazi uniforms. Franz tells Fani of his dream about a train hurtling forwards to some unknown destination, and, as he goes from home to the army to prisons on trains, we see the coal fires that burn at the heart of the locomotives. 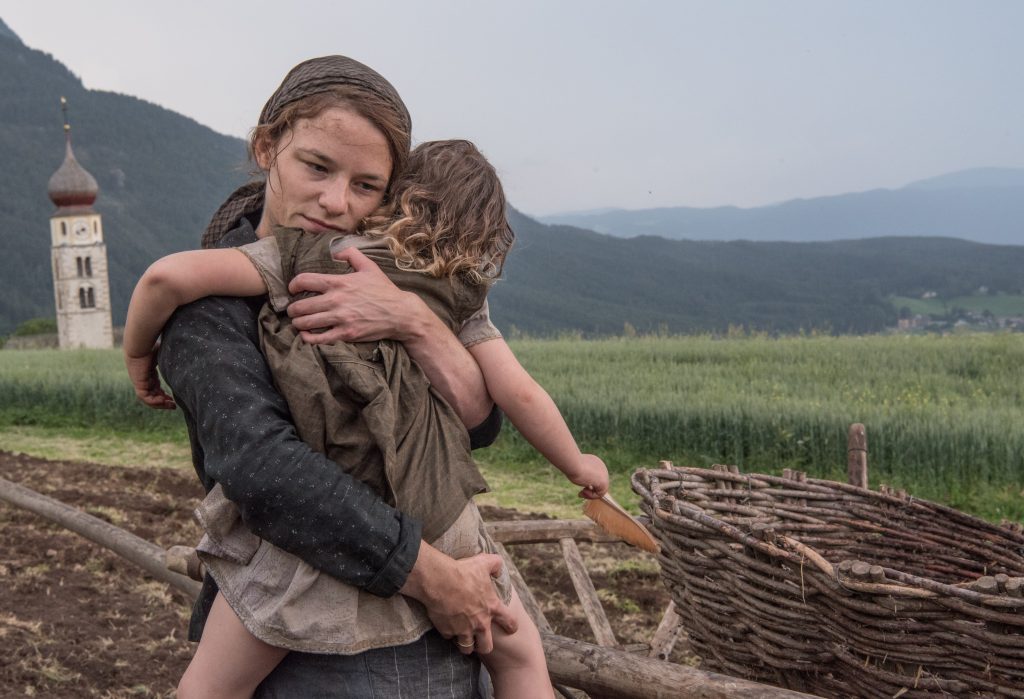 The conversation between Franz, Fani and God crystallizes in a dark moment in the Berlin prison. We see Franz brutally beaten by the prison guards while we hear him praying in voice-over. He’s riffing on Psalm 23: “You, my shepherd . . . You make me lie down in green pastures . . . by the river of life.”) The camera floats down the dark prison hallway, looking in at each man in his cell lit from the barred windows. This point-of-view shot can’t belong to Franz, who is cornered by the guards in his cell. Another blow. “You, our light . . . ,” he prays, again from the Psalms, “Darkness is not dark to you.” The music swells, and the camera rushes down the hallway and up the stairs to the light streaming in from a window on the prison’s top floor.

In that same moment, Fani is also praying. We see her kneeling in the barn, where she’s positioned blocking the light from the doorway. She pleads, “Lord, you do nothing. Where are you?” As if in answer, a shot of flies swarming in Franz’s cell cuts to Franz and Fani at the edge of a ripe wheat field with their daughters in the mountains.

When Fani learns that Franz has been condemned to death, she rushes to Berlin to see him. There are few cuts away to images in this scene, and the music is an Agnus Dei. It’s Franz’s last chance to change his mind, sign the paper and swear loyalty to Hitler. Disregarding the arguments of the attorney and the priest, who start the scene standing in front of the small room’s two windows as though blocking the light, Franz looks into Fani’s eyes and asks her, “Do you understand?” Her answer isn’t yes, but it is vibrant in its power. “I love you. Whatever you do, whatever comes, I’m with you always.”

In A Hidden Life, Franz speaks rarely and shows only subtle emotion on his face. Still, his character is anything but flat because we’ve seen the motions of his interior life. He will give up his beloved mountains and wind, the aching beauty of flowing water and sunlight, and even his wife and daughters not to sign that evil oath, and to follow the Christ he’s heard and looked for over his shoulder. Fani’s sacrifice of love means everything because we’ve heard the cries to God she hasn’t shared with Franz and seen the obstacles she’s overcome to say those words. In Malick’s swooping camera to the sky, there’s a third character in this marriage, the God whose voice calls Franz. To echo the painter—in A Hidden Life, Malick has painted a true Christ.

A Hidden Life: Terrence Malick Helps Us See the Invisible first appeared on December 11, 2019, at ChristAndPopCulture.com.