Speech and Conscience in A Hidden Life

Since 2016, Joe Gleason (South Bend) has been on assignment from the community to work as an editor for the film director Terrence Malick. (Malick’s 2011 masterpiece The Tree of Life was recently named the number one film of the decade by the Associated Press.) The film Joe worked on has been playing in theaters since December. It’s called A Hidden Life.

A Hidden Life tells the story of Franz Jägerstätter, an Austrian farmer and devout Christian who was executed by the Nazis in 1943. The title of the film comes from the 19th-century novel Middlemarch, by George Eliot, “for the growing good of the world is partly dependent on unhistoric acts; and that things are not so ill with you and me as they might have been, is half owing to the number who lived faithfully a hidden life, and rest in unvisited tombs.”

Writing in The Wall Street Journal, critic John Anderson said, “With A Hidden Life and the story of Franz Jägerstätter, the director [Malick] has found the ideal vehicle for his cosmic inquiries, and has created a film that is mournful, memorable and emotionally exhilarating.”

He added, “The editing, by Rehman Nizar Ali, Joe Gleason and Sebastian Jones, is superb.”

In a note to community members, Joe wrote, “I cannot adequately express my gratitude for the gift of this amazing community. I may be temporarily in a different city, but my heart is and always will be with the People of Praise. Thank you for your prayers, love and support as I’ve worked on this once-in-a-lifetime project.”

In this issue of V&B, we are delighted to publish two essays about A Hidden Life written by community members Andrew Zwerneman (northern Virginia) and Elizabeth Pease (Servant Branch).

Andrew Zwerneman's piece is presented below. You can find Elizabeth Pease's piece here. 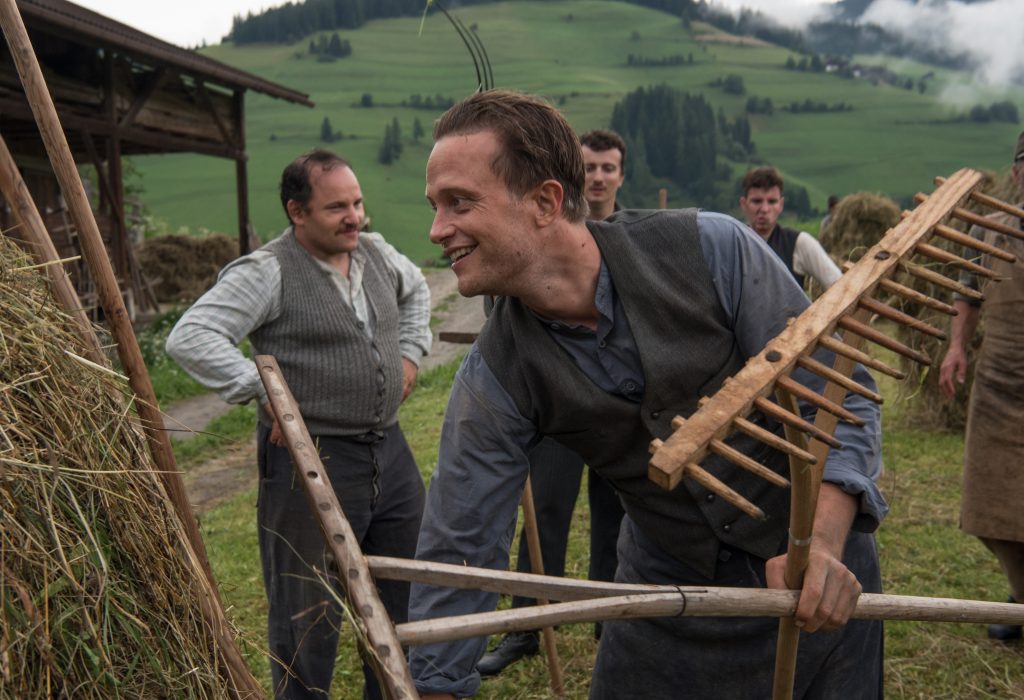 Speech and Conscience in A Hidden Life

“Sprechen Verboten” (Speaking is forbidden). Stenciled on the interior wall of a Nazi prison yard, these two words loom over Franz Jägerstätter, the protagonist of Terrence Malick’s latest film, A Hidden Life. They are part of the crucible employed by the regime to bend this one, seemingly insignificant, Austrian conscript to its will. A prohibition on speech is a terrible experience for any man because it undercuts his freedom and responsibility. This is true of its counterpart as well, which demands that one speak against one’s conscience. The weight of the oppression grows heavier when a man is isolated from those who would inform his conscience. Everyone needs to speak in true freedom; every conscience needs to hear from faithful companions. Genuine speech is neither violent nor servile; it is expressed as understanding, memory and love. Nazi ideology stood in sharp contrast to what is true about our humanity, so it is no surprise that Hitler’s Reich imposed great suffering on anyone who, for reasons of conscience, refused to speak what was commanded. Still, how does one film the work of the conscience, hidden as it is? How does one capture the internal struggle to speak when confronted by the demand for conformity? Malick successfully recreates this struggle for us, and, while his story focuses primarily on the struggle of one historical individual, the experiences Malick captures on film deepen our understanding of and sympathy for the precarious condition we all share.

Franz and his wife Fani live in the remote Tyrolian village of St. Radegund. Early in the film, their existence is Edenic. At the village’s edge, bells toll from the tiny church where Franz serves as sexton. The villagers live in neat, wooden cottages crafted seamlessly into the ancient, ascending mountainscape. Most of the film’s dialogue is spoken in English, but the villagers greet one another with “Grüss Gott” (God bless you). Life here is verdant and without want, their land and abundance shared in peaceful harmony as if the mountains have raised St. Radegund beyond the veil that separates heaven and earth. As Fani says in a voice-over, “We lived above the clouds.”

Still, St. Radegund is not quite beyond the world’s reach. In the opening minutes of the film, Malick weaves in black and white footage of a Nuremberg rally. (The footage is from Leni Riefenstahl’s 1935 Nazi propaganda film, Triumph of the Will.) The Nazi faithful parade from the central market square’s Frauenkirch  (Church of Our Lady) to the rally grounds  at the city’s edge. Hitler plays the messiah, descending by plane from the clouds above, then processing down the wide stadium stairs with his acolytes flanking him in liturgical formation. He is the high priest in a massive concrete temple. His congregation is vast and overwhelming; column upon column of brownshirts and stormtroopers assemble beneath Roman standards and banners marked with the twisted cross. The orchestrated ritual heralds the instantiation of Hitler’s millennarian vision. There is nothing hidden: These forces, rallied and sharply arranged, are poised to execute their savage mission across Germany and beyond its borders.

Malick juxtaposes the Nuremberg scene with one in which the camera pans across the majestic mountains surrounding St. Radegund. We hear the mechanical grind of a plane engine invading the clouds and Hitler’s percussive voice cracking across the high valleys. Each signals a new form of speech for Franz, the hidden man, and for St. Radegund, the hidden village. Neither can avoid the Third Reich’s arrival; each must respond. Malick has set his stage. 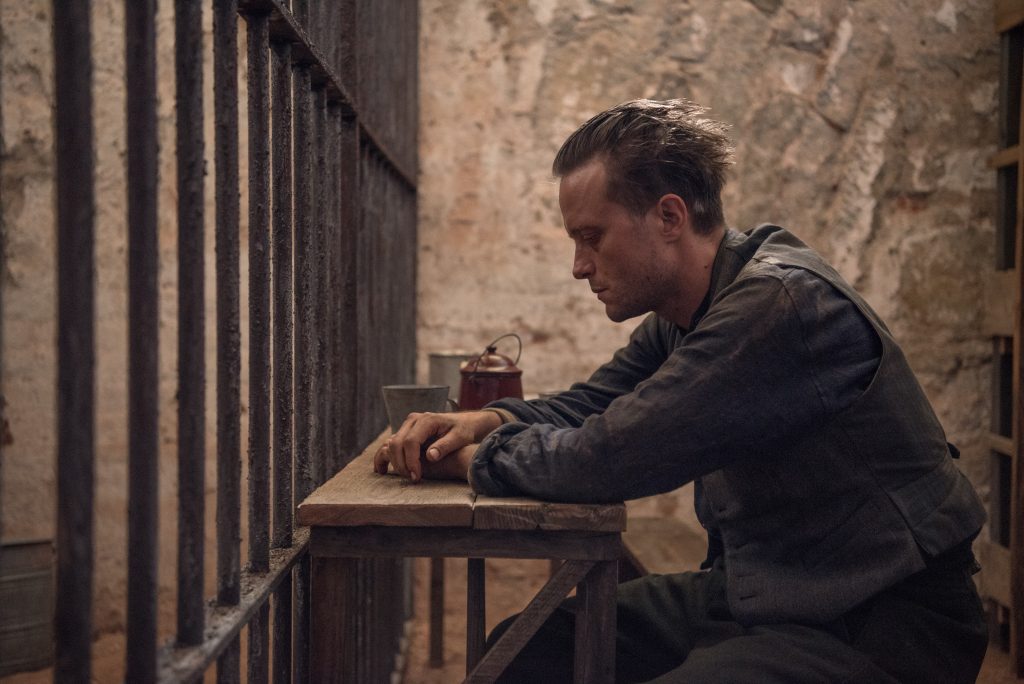 Surprisingly, it takes little time for the peace that once graced the village to collapse. At the center are two emerging opponents. There is Franz, who, as a conscript in the Wehrmacht, contemplates a refusal to take the oath to Hitler. On the opposing side are the villagers who wholeheartedly embrace the Anschluss. Home for now and in between training sessions with the army, Franz knows that his next time in uniform will bring the dreaded ceremony. His disinclination to embrace the Nazi culture, now gathering steam in St. Radegund, evokes contempt among his neighbors. The hostility deepens with the growing recognition that Franz will likely not take the oath. The hotheads goad him; the mayor shames and reviles him. How quickly they have forgotten the manners of grace; how little their hearts stir now at church bells and mountain peaks.

What is yet more compelling is Franz’s struggle to speak his mind regarding his decision and to hear some kindred voice. The parish priest counsels him to take the oath: Consider the “consequences,” he warns. Even his bishop in Linz is clearly afraid for himself if he were to encourage Franz in any way that opposes the Reich. The few villagers sympathetic to Franz offer no significant help to their friend, caught as they are between worry and despair. Fani remains true to her husband from beginning to end, and their love for each other proves a great source of freedom for Franz, but there is no doubt that her ability to understand him is limited. All this means that the demands on Franz’s conscience increasingly isolate him.

Franz, we learn, objects to the killing of innocents in the Nazi invasions, which he witnesses in a black and white newsreel. It is a factor that weighs on him; he cannot ignore that knowledge if he is to be true to his conscience. At the same time, there is the seeming emptiness of his refusal to take the oath. Once he finally refuses and begins his journey through prison to trial, Franz is repeatedly counseled that his choice will make no impact on the Reich,or on the outcome of the war. He is counseled in other ways too, with weapons of persuasion: beatings, isolation from his family, and the prohibition on speech in the prison yard. For his part, Franz judges no one for taking the oath and makes no denunciation of his captors. Outside of St. Radegund and the narrow corridors of the military penal system, no one even knows of his plight. As he is driven from prison to courtroom through the streets of Berlin, he passes unnoticed. The accumulated effect of these facts is that his refusal appears to have no significant weight outside of the consequences it bears for his life and his family.

For all of the heavenly, mountainous imagery captured for our viewing, there is no clarion sound from above, no audible voice we can say is God’s. Still, there is a moment where it strikes us that Franz hears a calling: While waiting to return to the army, he is walking by the woods near St. Radegund, and something in the depth of the trees seems to hold him. The camera angle at this juncture is not, as it might well be in a Malick film, ascending upwards to the treetops. Franz is not gazing heavenward; rather, the angle is on his profile, facing the woods, seeking out or responding to something hidden from us but clearly sensed by Franz. He is focused but agitated. The moment is a definitive crossroads: He can act on what he hears in his conscience, hidden like the voice in the woods, or he can leave the woods behind in order to avoid the measurable consequences in store if he refuses to take the oath.

Throughout A Hidden Life, with the exception of “Grüss Gott” and some sweet exchanges between Franz and Fani, German is the language of coarseness, anger and violence. Hitler incites the crowd. The village mayor spews a crazed, extended rant. Sadistic prison guards spit their vulgarities in Franz’s face. A tribunal officer rages at him. All of this is spoken in German.

Late in the film, at a moment when Franz sits alone, we hear another voiceover. The camera zooms in on his haggard face. We don’t see him say anything; we just hear him. Softly, he speaks, “Vater unser im Himmel . . . ” (Our Father in heaven). It is the Lord’s Prayer. The coarse, violent German, repeatedly thrust at Franz, finally gives way to the tender cry of a suffering son for his father. Speech is redeemed by a prayer, ancient but called to memory in the freedom found only when a man has nothing left but God.

Speech and Conscience in Terrence Malick’s A Hidden Life originally appeared on December 11, 2019, at Public Discourse: The Journal of the Witherspoon Institute. Reprinted with permission. https://www.thepublicdiscourse.com.