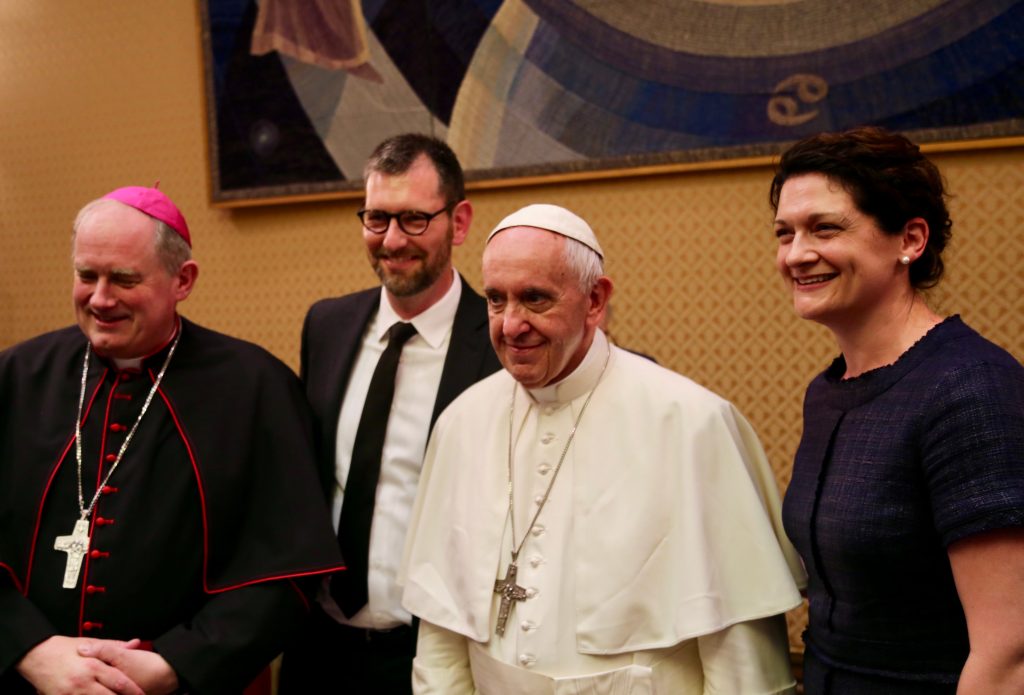 Jay Pathak, a pastor at Mile High Vineyard Church in Denver, Colorado, and a member of the John 17 Movement, took this picture of Bishop Peter Smith, Eric Shreves, Pope Francis and Hillary Shreves.

Eric and Hilary Shreves and Bishop Peter Smith (all Vancouver-Portland) had the chance of a lifetime in June when they traveled to Rome for a two-hour meeting with Pope Francis. On Thursday, June 8, they gathered at the Vatican with a group of about 50 people, mostly evangelicals and Pentecostals from the US, for a free-flowing discussion punctuated by praise and worship. Most of the participants are part of the John 17 Movement, a grassroots Christian unity organization based in Phoenix, Arizona.

For Eric and Hilary, the journey to Rome began with an out-of-the-blue phone call from Josh Butler. Josh is a friend of Eric’s and a pastor at Imago Dei Community, an evangelical church in Portland. In a joking way, Josh explained that he had tickets to a party he wanted to invite Eric and Hilary to—a special party with Pope Francis. They had two days to decide—two days to arrange childcare and reshuffle their work schedules. The Vancouver-Portland branch and People of Praise headquarters agreed to pay for their trip, as well as for Peter’s.

Josh had met Pope Francis once before, at a similar meeting in 2016. There, he had offered what he called a “confession” to Pope Francis, explaining that, while he had been involved with a network of evangelical churches in Portland, he had not done much to build bridges with Catholic brothers and sisters. As Josh recounted, Pope Francis “got a large smile on his face and blessed me.”

Inspired by that experience, Josh had returned to Portland and called Eric, a Catholic, and the two had met several times for coffee and meals. Eric had introduced Josh to Peter and to Joel Kibler (also Vancouver-Portland), and Josh, in turn, had invited Peter and other Catholic leaders to a gathering at his church. All of that led up to Josh’s invitation on the phone.

At the meeting, Pope Francis sat on a cushioned metal chair like all the other participants. He began by saying he didn’t have a speech prepared, but hoped for an open, candid conversation. The meeting itself was private, with no Vatican press release summarizing its contents. “Pope Francis talked a lot about Christian unity,” Eric said. “He said the first thing we need to do is pray together. Don’t underestimate the power of petitionary prayer!”

During the meeting, Josh had a chance to update Pope Francis on the steps he had taken in Portland to build unity.

Aside from meeting with Francis, the John 17 group spent several days together getting to know one another and sharing about their personal experiences of ecumenism. “I left Rome so incredibly grateful for our ecumenical life in the People of Praise and for what the Lord is doing with ecumenism on a broader scale in the world,” Hilary said. “We found ourselves sharing a lot about our practical life in the People of Praise, about how ecumenism works in women’s groups and in sharings at community meetings. People really wanted to hear about our life together.”

Josh says that he expects the ecumenical conversation in Portland to continue. “God’s movement can be unpredictable. I’m excited to see what’s coming next.”